Viber is one of the most successful free VoIP iPhone apps, and their 2.01 update is now available in the App Store. Viber earlier released 2.0, but they pulled it due to technical issues. The new releases brings the much anticipated feature of text messaging and some refinements.

1. Viber now has free text messaging!
Send and receive free text messages to and from all your Viber contacts. Weâ€™ve added a new tab called Messages. To send a text, simply select a contact from your list, and start texting for free.
New â€œFree Text Messageâ€ button added to Viber contact details.
Tap this button to send this user a free message.

Viber will also notify you about incoming messages so you wonâ€™t miss a word single text.

2. Favorites tab location changed
To view your â€˜Favoritesâ€™ – go to the contacts tab, and tap the Favorites button at the top.

3. Improved calling mechanism
Now, youâ€™ll always know the status of your outgoing calls.
Once a call is placed, a â€œCallingâ€ state will indicate that Viber is now connecting to the other party.
Once a connection is established, a â€œRingingâ€ state will indicate that the other partyâ€™s Viber, is now actually ringing (note that a call can still be established even if you don’t see the “Ringing” state).

4. Placing regular calls through Viber
A â€œDonâ€™t show againâ€ option was added for to the â€œPlace a regular carrier callâ€ inform dialog.

5. Giving You More Control
A new option provides the ability to deactivate your Viber account, so that you can easily reactivate Viber with a new phone number.
Find this option under the â€˜Moreâ€™ menu.

I tried out the text messaging feature with a friend and it works great. However, it won’t replace WhatsApp for me but it’s a great alternative to talk to other friends as well. The app looks and feels much better. Can’t wait to try out some free calls! 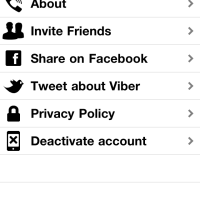 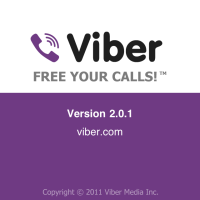 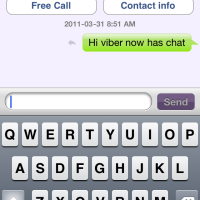