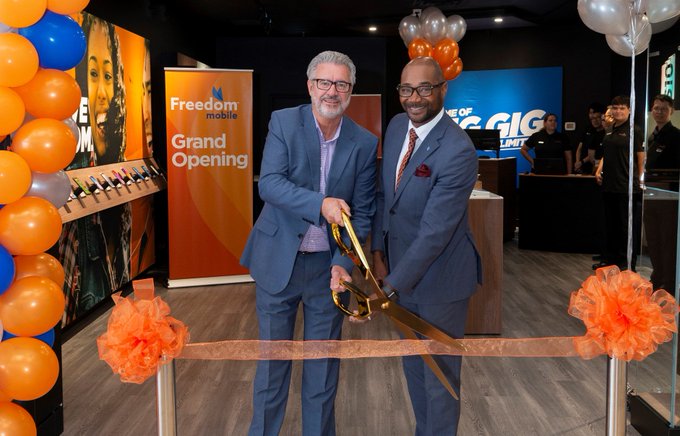 The city’s Mayor, Lyn Hall, was on hand for the Freedom Mobile announcement, seen with Chima Nkemdirim, VP Government Relations for Shaw, in the image above, at a retail store grand opening.

“We are pleased to give the people of Prince George the freedom to enjoy their big, digital lives in a mobile-first world where being connected is critical. At long last, people across the community can access the tremendous value that Freedom Mobile offers elsewhere in Canada,” said Paul McAleese, President, Wireless, Shaw Communications, in a press release.

As with other launches, Shaw is offering a six months promotion offering $15 off Big Gig plans, which makes the company’s $60/10GB plan priced at $45/10GB for half a year.

Freedom Mobile is available at the following retail locations in Prince George:

Lyn Hall, Mayor of Prince George said in a statement, “Having a connected population allows the City of Prince George to better engage with residents and visitors and to further improve the economic development of our city.”

“Competition is good for our economy, resulting in better services in our communities and lower prices for all,” added Todd Doherty, Member of Parliament for Cariboo-Prince George.