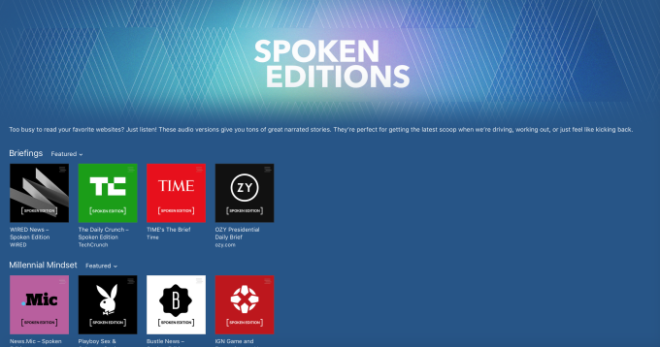 Today, Apple has officially launched a new section in iTunes called "Spoken Editions," which lets users listen to articles from select websites. The podcasts are powered by SpokenLayer, a company that turns a publishers' RSS feed of articles into audio recordings, letting users hear their favourite sites instead of reading them. In a statement to...
iPhoneinCanada.ca
6 years ago

Apple to Debut ‘Spoken Editions’ of Written News on iTunes

According to a new report from TechCrunch, Apple is preparing to launch a new iTunes category which features audio podcasts  content transformed from written work content from major publications. The report notes that a number of podcasts labeled “Spoken Edition” recently popped up in iTunes’ Podcasts section. The upcoming format could be described as audiobooks […]
iPhoneinCanada.ca
6 years ago