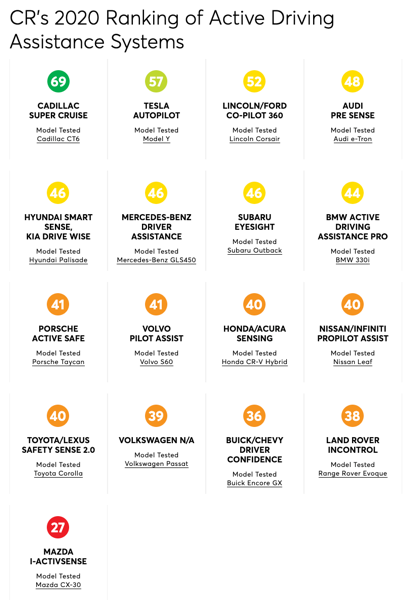 Consumer Reports gave the Cadillac a score of 69 out of 100, whereas the Tesla Model Y could only score 57. The main reason why they say GM’s Super Cruise outranks Tesla’s Autopilot is its ability to monitor whether the driver is paying attention or not.

The Super Cruise system uses a small camera facing the driver’s eyes to assess whether they are watching the road ahead.

“If the system determines that a driver isn’t paying attention, it delivers multiple warnings—such as bright red lights on the upper rim of the steering wheel—to grab the driver’s attention. If the driver still does not react, the system will start to slow the car down on its own, eventually bringing it to a stop. It also will call for help.”

“When it comes to lane keeping assist, Tesla did the best in our tests. But systems from Audi, Cadillac, and Lincoln performed almost as well” said Consumer Reports.

Tesla’s Autopilot was, however, ranked the best in the Ease of Use and Capabilities and Performance categories, scoring 7 and 9 out of 10, respectively.