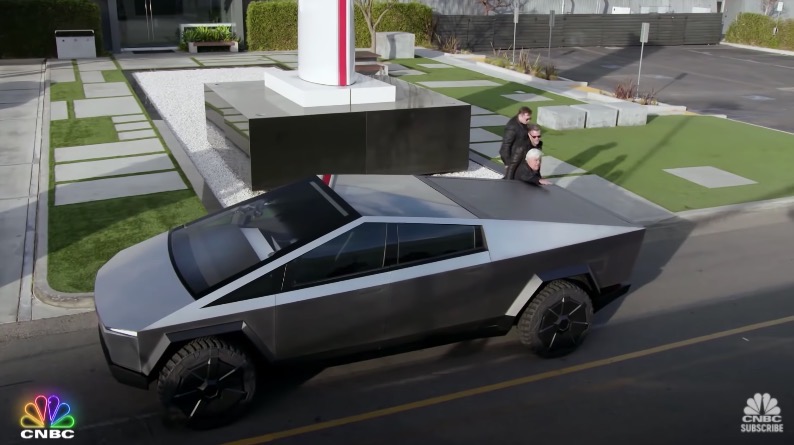 On Monday, CNBC teased a clip of Jay Leno’s Garage, which featured Tesla’s Cybertruck being driven around Los Angeles with the comedian and Elon Musk.

That short teaser was just half of the full 6-minute segment, which aired yesterday. The full clip was shared this morning by CNBC, which you can see above.

It doesn’t exactly reveal too much about Cybertruck, but we do get to see the massive electric truck head through Musk’s Boring Company test tunnel under L.A. for the first time, plus also a closer look at the truck’s bed with Franz Von Holzhausen, Tesla’s senior design executive.

After Leno drives slowly through the tunnel and the Cybertruck exits, it then takes an elevator to exit the tunnel back to the surface. “Wow, we just barely fit,” says Musk. “How crazy is this?”

In the end, Leno thanks Musk for his preview of Cybertruck and his “glimpse of the future” from the Tesla founder, and the clip ends.

The Tesla Cybertruck is set to debut in 2021, while Tesla yesterday dropped prices by up to $7,000 for its electric vehicles in Canada. Tesla’s Cybertruck will start at $39,900 USD, or just under $55,000 CAD after current exchange rates.