Tesla Should Not Have Lowered the Price of Autopilot Says Musk

Is a tweet sent out earlier today, Elon Musk has said that Tesla should not have temporarily lowered the price of Autopilot, its semi-autonomous driver-assistance system. He also said that Autopilot prices would “revert to normal on Monday” (via Business Insider). 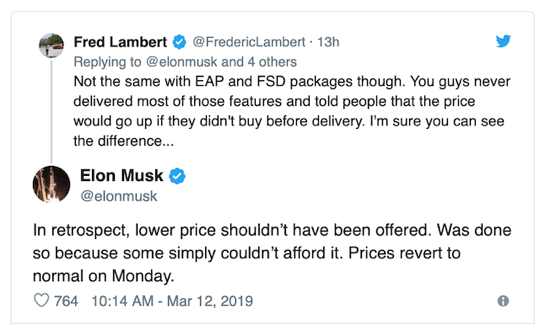 “In retrospect, lower price shouldn’t have been offered. Was done so because some simply couldn’t afford it”, said Musk as he appeared to be referring to post-purchase discounts for existing vehicle owners rather than the pre-purchase price changes Tesla made at the end of February.

On February 28, Tesla lowered the prices of its vehicles and Autopilot, while shifting some Autopilot features into an upgrade package.

In early March, Tesla said it would lower the post-delivery price of Autopilot and the upgrade package for existing customers to $2,000 and $3,000, respectively.

The move frustrated some Tesla owners who tweeted at Musk, saying the decrease was unfair to owners who had purchased Autopilot before the price decrease. The company has now announced last week that it would raise the prices for all of its vehicles by 3% after decreasing prices by an average of around 6%.

Tesla is set to unveil its Model Y compact crossover this week on March 14, 2019.