Private beta testers of SpaceX’s Starlink satellite internet have started leaking their speed tests to the web, as results have been found on Ookla’s Speedtest.net (via Tesla North).

Reddit users have been compiling and sharing these ‘confirmed’ speed tests, with the fastest result seen to date seeing 61.32 Mbps download, 9.90 Mbps upload and a blazing 20-millisecond ping rate, or latency, which measures the time it takes for data to travel from source and destination.

The range of pings have been in the 20-94 ms range, while download speeds are at 11 Mbps to 61 Mbps as mentioned above. Upload speeds have been from 4 Mbps up to 17.70 Mbps, all from low earth orbit satellites hovering 550 km above earth. This upload speed makes Shaw’s Fibre+ Gig internet with its up to 25 Mbps upload look bad–and that’s from a wired connection on earth. 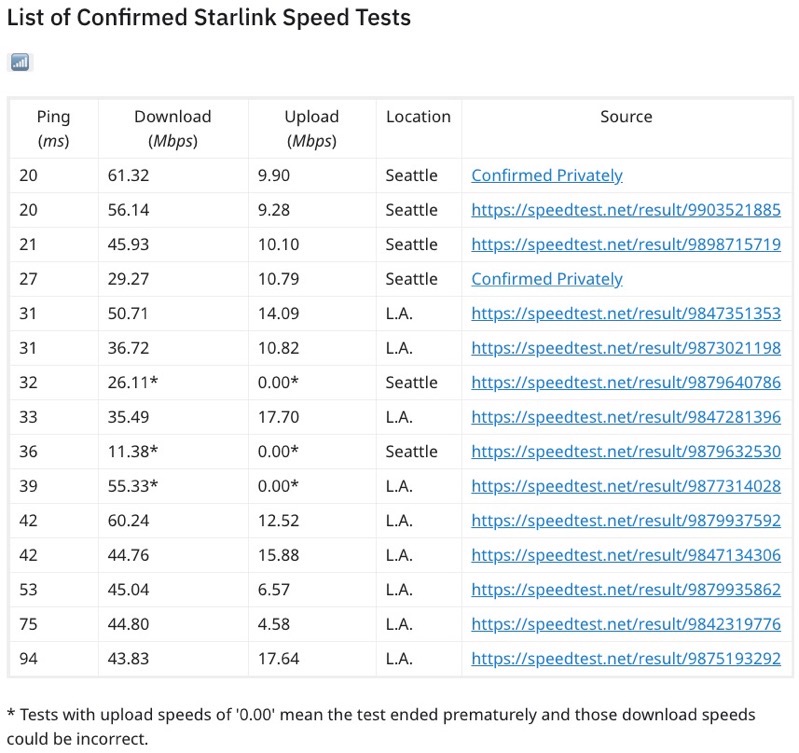 Earlier this summer, SpaceX and Tesla CEO Elon Musk had mentioned the low latency of Starlink satellite internet at around 20 ms. The internet service is “designed to run real-time, competitive video games,” said Musk, who also mentioned Version 2 of the service at lower altitude “could be as low as 8ms latency”.

Starlink internet private betas are set to debut in Canada later this year and so far sign ups to test the service have reached “extraordinary demand”, says the company. Details of the beta program leaked earlier this year.

The low earth orbit satellite service has about 600 satellites currently up 550 km in the skies, while the system will eventually reach 12,000 satellites as allowed by the U.S. FCC. For rural Canadians tired of dealing with slow, expensive internet, SpaceX’s Starlink internet may be the gift you’ve been waiting for in 2020.

As reported by the folks over at Tesla North, Tesla delivered its first production electric truck to the customer, PepsiCo, at its Semi delivery event on Thursday evening at its Gigafactory in Sparks, Nevada. At the event, CEO Elon Musk was also available for a presentation alongside Dan Priestley, Senior Manager, Semi Truck Engineering. Musk...
Usman Qureshi
11 hours ago