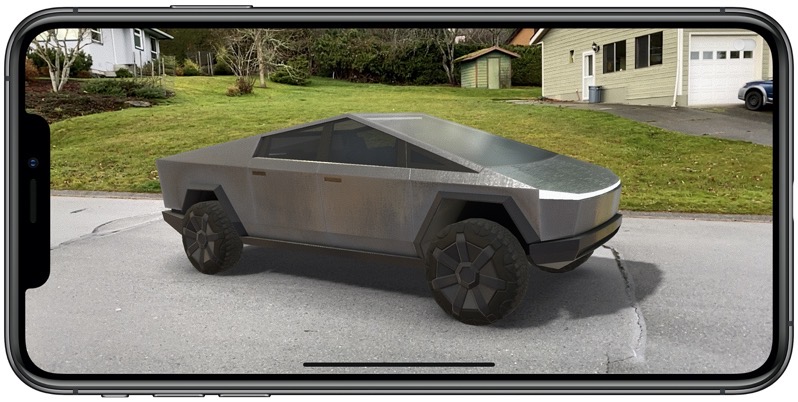 Tesla’s Cybertruck electric pickup comes with an out-of-the-box design ethos that is slowly growing on many people. If you want a Cybertruck today instead of waiting, it’s possible through the new augmented reality app, AR Cybertruck.

The app AR Cybertruck for iOS is the brainchild of developer Pat Carver from Salt Lake City, Utah, available for $2.79 CAD in the App Store.

The app uses augmented reality and lets you place a Cybertruck anywhere. You can toggle on lights, the truck’s rear hatch and tonneau cover, add a bloom effect and also a “mini mode” for a smaller version of the truck, because it’s huge af. You can also hide the app’s UI so you can screen record a video of your truck driving using the on-screen controls.

Carver told iPhone in Canada in an interview he is a big Tesla fan, along with his 11-year old son. They wanted to see the Cybertruck in AR so the idea to create an app began. Development took “about a week with very little sleep,” says Carver, adding it was “hard to stop when you’re excited about a project.”

The AR Cybertruck app was made because Carver said he is a naturally impatient person and didn’t want to wait for his order of the latest electric pickup from Tesla.

Since the app’s release this week, “reception has been great!”, said the developer, adding “it’s been really fun to see the videos and pictures from people using the app.” 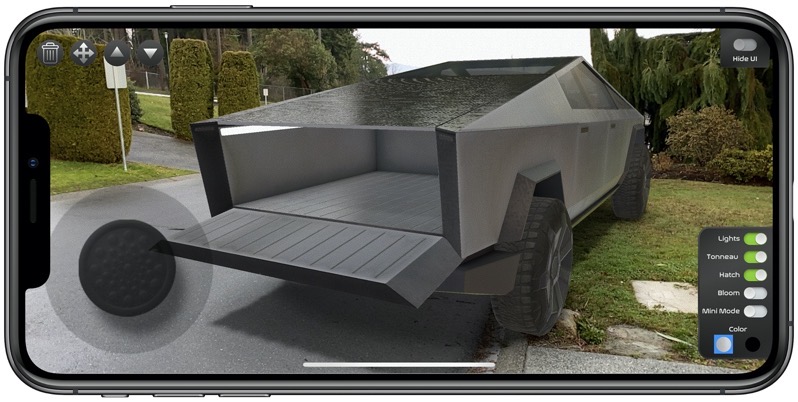 As for upcoming features, AR Cybertruck will have options for a white coloured pickup, along with screen recording while in hidden UI mode. Exterior and interior truck visuals are set to improve, while tonneau open and close animations are also coming.

Also coming is the ability to open and close the frunk and rear storage areas. Carver says since exact dimensions of Cybertruck aren’t available, he may add a disclaimer for this feature.

A new obstacle course feature (mostly for Mini Mode) will be coming soon, an idea request from Carver’s son.

Since the app visuals are downloaded over-the-air, Carver says he’s able to send updates instantly without relying on Apple or Google. “So the truck will improve over time and become as realistic as I can make it,” says Carver. Such a Tesla move, we love it.

Click here to download AR Cybertruck in the App Store—it’s $2.79 CAD and is a great way to show off Cybertruck early to your friends. A version for Google Play is coming soon.