As reported by the folks over at Tesla North, Tesla delivered its first production electric truck to the customer, PepsiCo, at its Semi delivery event on Thursday evening at its Gigafactory in Sparks, Nevada.

At the event, CEO Elon Musk was also available for a presentation alongside Dan Priestley, Senior Manager, Semi Truck Engineering.

Musk and Priestley highlighted some of the major features of the Semi, pointing out how it has 3x the power of any diesel truck on the road, and the efficiency to go 500 miles on a single charge.

The Semi has a 1,000-volt powertrain, with Priestley suggesting there are “more vehicles coming with that.”

The tri-motor system and carbon-sleeved rotors in the Semi are the same ones used by Plaid vehicles such as the Model S and Model X. There’s one unit for efficiency, and two acceleration units for torque.

Musk said one of the drive units is small enough to hold in your hand and can power a Semi with an 80,000-pound load.

Tesla also shared a chart of the Semi and its battery usage, completed at highway speed, without charging on the way, and at over 4,000 ft of elevation. This was a 500-mile test drive completed on a single charge, from Fremont, California, down to San Diego. The state of charge began at 97%, while ended at 4% at its destination, while carrying a full load. You can see the energy recouped from regenerative braking, after descending the Grapevine. This was an 8 hour journey and the driver took a mandatory 30-minute rest along the way. 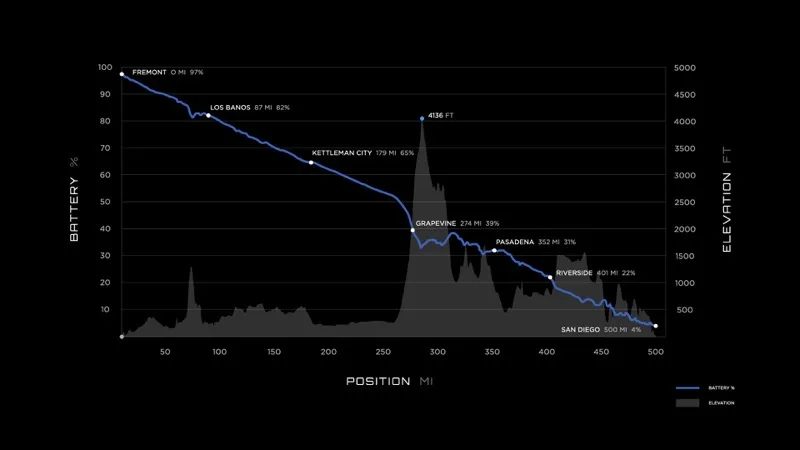 Tesla says it will use Semi for its own fleet and supply chain, as they want to close that feedback loop to make the truck better.

The company also shared a timelapse video of the Semi driving 500 miles on a single charge which took 8 hours. The full unedited video will be shared later, said Tesla:

For now, it’s unclear if and when Autopilot will come to the Semi, while we still don’t know detailed specs about maximum battery capacity, pricing and also delivery dates and production. But Tesla says this milestone with Semi will allow for a reduction in greenhouse gas emissions from traditional diesel trucks.