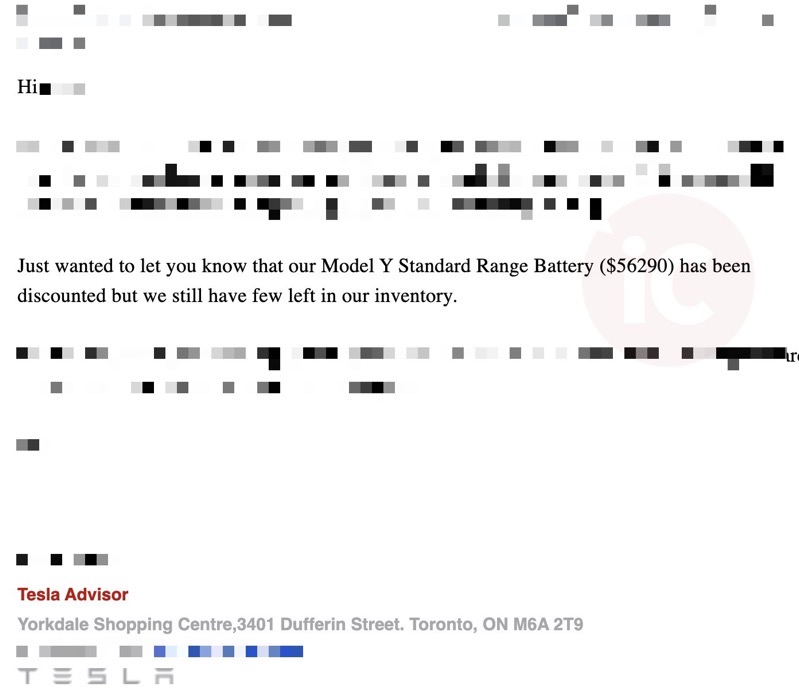 Just under two weeks ago, Tesla axed its most affordable Model Y, the entry Standard Range Rear-Wheel Drive version from its website, instead shifting to offering only Dual Motor All-Wheel Drive configurations.

The only way to buy this entry Model Y, at $56,290 CAD, is to find a Tesla retail location with existing stock available. According to a tip from an iPhone in Canada reader, the Tesla Yorkdale store says it has a “few left” in their inventory. Just a heads up in case you were looking to buy a Model Y this weekend.

According to an email sent out by a Tesla advisor on Friday afternoon, the representative explains, “Just wanted to let you know that our Model Y Standard Range Battery ($56290) has been discounted but we still have few left in our inventory.”

The entry RWD Model Y debuted only on January 7, but was removed by Tesla merely six weeks later.

Tesla CEO Elon Musk clarified afterwards the Standard Range Model Y was still available “off menu”, and explained “I don’t think the range, in many drive conditions, yet meets the Tesla standard of excellence.” With 393 km of expected range, the entry Model Y would see this number dwindle significantly in colder conditions.