Tesla saw its shares jump more than 14% during afternoon trading today, pushing the stock to a new all-time high, before giving back those gains and falling into negative territory, CNBC News reports. At one point, Tesla’s market cap reached $321 billion, which made it the 10th largest U.S. stock by market value, according to FactSet. 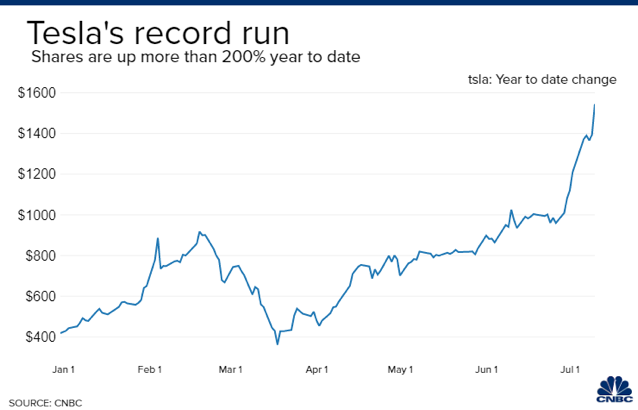 Tesla’s stock has gone up more than 55% in July alone after the company announced it beat delivery estimates in the second quarter, delivering about 90,650 vehicles. As the electric car maker’s stock continues on a record run, speculation is growing that it will soon join the S&P 500.

Investors believe that the company could report a fourth straight quarter of GAAP profits when it posts second quarter results on July 22, meaning it could be considered for inclusion in the S&P 500.

And some, including Larry McDonald, editor of The Bear Traps Report, believe the recent run is driven not by fundamental strength, but by investors bidding up shares ahead of the company’s potential inclusion in the S&P 500.

“By buying up Tesla TSLA now, front-runners are forcing the S&P Indexes to give the stock a higher and higher weighting,” he wrote in a recent note.