Tesla Stock on Track to Hit $1,000 Per Share Claims Trader

Speaking on CNBC’s “Trading Nation” on Thursday, Ascent Wealth Partners managing director Todd Gordon said that Tesla’s upcoming earnings could give the company’s stock the thrust to push through the $1,000 mark. Currently trading at $875 per share, the electric car maker’s shares have surged nearly 110% this year. 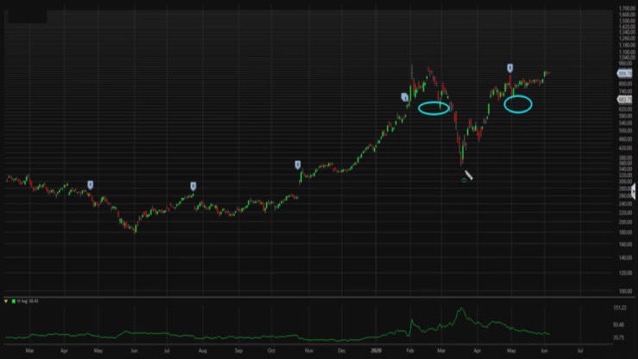 “We like the name,” Gordon said during the interview. He added that Elon Musk has “picked up a little bit of credibility” following the first launch of a privately funded space mission.

“This opens up all sorts of possibilities in terms of future exploration programs out of NASA so very interesting there and he seems to be a little bit more measured in his tweeting,” he continued.

“Last quarter, Tesla crushed earnings,” said Gordon. “We have earnings coming up here on July 22 so we still have a little ways to go. But if we take a look at the chart here, it’s a very interesting technical formation.”

“It sort of sets up a trampoline or – forgive the pun — a launch finally into that $1,000 region,” said Gordon.

Gordon sees an inverse head and shoulders pattern formed by a low surrounded by two higher lows, suggesting the reversal of a downtrend.

As reported by the folks over at Tesla North, Tesla delivered its first production electric truck to the customer, PepsiCo, at its Semi delivery event on Thursday evening at its Gigafactory in Sparks, Nevada. At the event, CEO Elon Musk was also available for a presentation alongside Dan Priestley, Senior Manager, Semi Truck Engineering. Musk...
Usman Qureshi
1 day ago