Update Oct. 6, 2020: Tesla MFA went live this afternoon. Our original story is as follows below.

As pointed out by the folks over at Tesla North, Tesla appears all set to roll out the much-awaited multi-factor authentication (MFA) option for account login as the feature has started to show up in some Tesla owner accounts online. 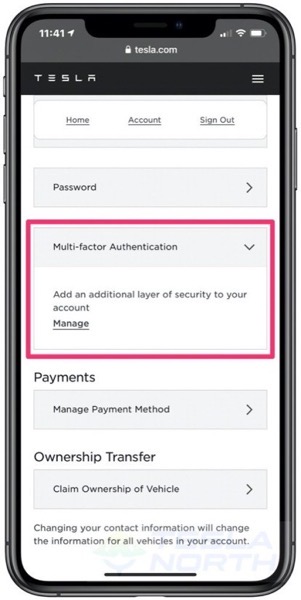 As you can see in the screenshot above, a new Multi-factor Authentication option can now be found in the Account > Password section, which reads, “add an additional layer of security to your account.” Tapping on Manage takes you to mfa.tesla.com, which has not yet gone live.

Meanwhile, another screenshot (shown above) shared by @techAU seems to explain the instructions for setting up MFA on a Tesla account.

“Setting up multi-factor authentication is easy. Before you get started, install an authenticator app to your mobile device (You can download any third-party authenticator you prefer),” explains Tesla’s instructions.

Tesla’s instructions tell owners to sign in with their email address and password, then enter the passcode sent to their device via the authenticator app.