The Apple iPhone headphones are very functional headphones that get the job done. They won’t please audiophiles out there, but for the rest of us they are just fine. One of my favorite features is the mic/button that lets you control music (even on my MacBook!) and have conversations.

A couple weeks ago I noticed my mic stopped working, along with the button remote. At first I thought it was my iPhone and a recent firmware update that caused the headphone jack to malfunction. So, I ended up calling Apple Support on the phone. I told them how my mic/remote wasn’t working and they immediately sent out a new pair via next day via Fedex!

I opened the package I tested out these brand spankin’ new headphones–only to have them not work still! At this point in time I decided to turn to Google. I was able to discover what was causing this minor headache of mine: a chunk of lint!

I ended up using the end of a paperclip to dig out the massive chunk of lint below: 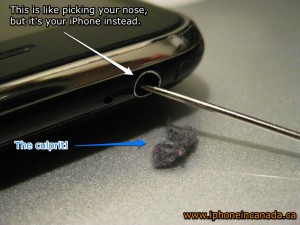