Apple Watch sales in the first three months of the year were pretty good, according to the latest report from Strategy Analytics, which claims that Apple has become the world’s top wearables vendor, surpassing Fitbit, once the leader of the market. 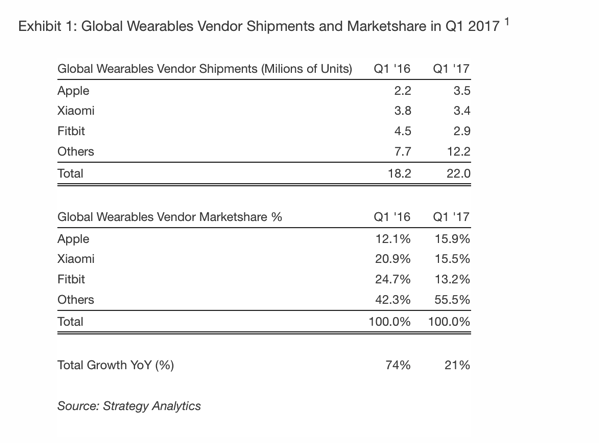 According to the market research firm, Apple sold 3.5 million Watch units during the quarter. The Apple Watch 2 is selling relatively well in the US, the UK (and elsewhere), due to enhanced styling, intensive marketing and a good retail presence. That gives Apple 16% of the global wearables market compared to 12.1% reported a year ago. Then, Apple had allegedly shipped 2.2 million Watch units.

The firm doesn’t explain how it gets the shipping numbers (Apple doesn’t release Watch shipments).

Xiaomi follows Apple with 3.4 million units, while Fitbit, the leader a year ago, shipped only 2.9 million units compared to 4.5 million shipped last year. Fitbit now has a 13.2% share of the global wearables market.

Cliff Raskind, Director at Strategy Analytics, said, “Fitbit shipped 2.9 million wearables worldwide in Q1 2017, falling a huge 36 percent annually from 4.5 million in Q1 2016. Fitbit has lost its wearables leadership to Apple, due to slowing demand for its fitnessbands and a late entry to the emerging smartwatch market. Fitbit’s shipments, revenue, pricing and profit are all shrinking at the moment and the company has a major fight on its hands to recover this year.”

Vendors shipped a total of 22 million units in the first quarter of 2017, up 21% annually from 18.2% reported for Q1 of 2016. The increase in shipments was driven by demand for new smartwatch models in North America, Western Europe and Asia.