One of the most talked about health monitoring features of the Apple Watch Series 4 is its ability to detect a spike in heart rate that typically accompanies atrial fibrillation, or AFib, a condition that rarely produces symptoms and can commonly go undetected. 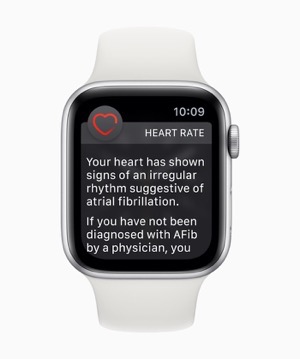 In an effort to determine how accurately the Apple Watch can detect these irregular heartbeats, Apple partnered with Stanford University to launch the Apple Heart Study, which according to the American Heart Journal, enrolled a massive 419,093 participants making it the biggest study of its kind ever conducted.

Recruitment emails were sent to Apple Watch users who only needed to download an app to sign up for the study and wear the Watch normally. The U.S. Food and Drug Administration then used the data from the study and cleared two mobile medical apps designed for use with the Apple Watch.

One app “analyzes pulse rate data to identify irregular heart rhythms suggestive of atrial fibrillation and notify the user,” and will be available on all versions of the Apple Watch. The second app creates an electrocardiogram (ECG) to monitor the heart “to detect the presence of atrial fibrillation and regular heart rhythm,” and will work with the Apple Watch Series 4.

Apple ultimately activated the Watch’s heart monitoring and notification features through the release of WatchOS version 5.1.2, while becoming one of nine companies the FDA selected to certify who wanted to create software-based medical apps.