Yesterday, the Apple Watch marked its first anniversary and since its launch, research firms and analysts have predicted 12-13 million devices sold in its first year, reports the Wall Street Journal, a number greater than sales of the original iPhone back in 2007. 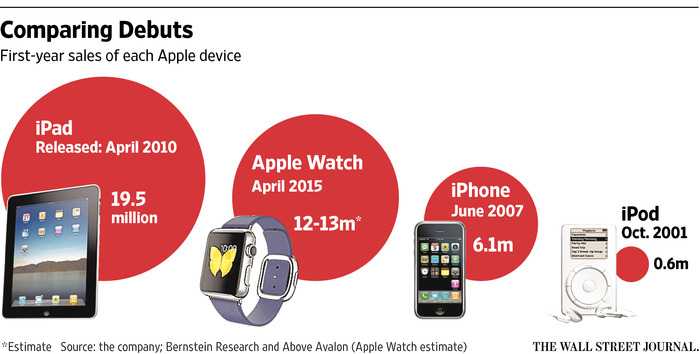 As for the next Apple Watch? Sources tell the WSJ Apple is working on making the device independent of your iPhone, by adding cellular connectivity, plus a faster processor to address ongoing concerns of the device being too sluggish:

There are relatively easy fixes for some concerns. Apple is working on adding cell-network connectivity and a faster processor to its next-generation Watch, according to people familiar with the matter.

Given the smaller physical footprint of Apple Watch, any cellular connectivity will most likely be via an integrated Apple SIM setup. Cellular connectivity means wireless carriers will be involved, and in Canada that brings anxiety on what it may cost to add a cellular option to your smartwatch.

Right now, Apple Watch is limited when it’s not paired to your iPhone. However, you can still use Apple Pay, track your fitness activity and more, according to Apple:

If your Apple Watch is within range of a known Wi-Fi network, you can also do the following without your iPhone:

Last week Apple told developers future Apple Watch apps must be made with watchOS 2, which means being able to run natively on the smart watch. This will make apps load faster, but there is still room for improvement, especially given the device’s hefty price tag.

Do you want cellular connectivity for your Apple Watch?