It’s that time of the year when the majority of us are picking out presents for our loved ones. As there are some great bargains out there, Fortune’s Philip Elmer-DeWitt was wondering how the Apple Watch ranks in the most sought-after gifts this year. 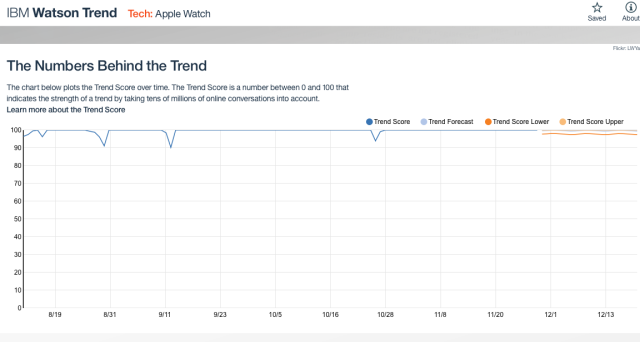 To find out he turned to both IBM and Google Trends. One says Apple Watch is a winner, the other quite the opposite.

According to IBM Watson Trend, the most hotly-discussed gift this holiday season is the Apple Watch, the wearable that hit the market this April. The Apple wearable has been on top of the trending scale with a trending score of between 94 and 100. As detailed by IBM, the Trending Score indicates the strength of a trend and takes into account a variety of factors from tens of millions of online conversations.

On the other hand, there is Google Trends, which this (Black Friday) morning gave the Apple Watch a 2 and the iPhone a 54 score.

By the way, the most searched product this Black Friday appears to be Beats by Dre. According to the IBM Watson Trend Hub, the Beats Solo 2 Wired On-Ear headphones are taking the crown this year on the day that “officially” marks the start of the holiday shopping frenzy.

There’s a major Black Friday deal coming from Sport Chek that is offering up 50x back in Canadian Tire Money, when you buy an Apple Watch from November 24 to December 7, 2022. These bonus CT Money events coupled with Apple Watch are the best time to purchase one of the latter, as you’ll get […]
IIC Deals
1 day ago

Amazon Canada’s early Black Friday deals right now also include a variety of Apple products as part of the sale, including Apple Watch, Beats Studio Buds, MacBook Air and Pro, iPad and more. Check out what’s on sale below right now in terms of Apple deals on Amazon Canada we’ve compiled for you: Up to […]
IIC Deals
2 days ago