We already know that Apple Watches have state-of-the-art OLED displays, as detailed by DisplayMate’s DisplayShootout analysis. But we also know — from earlier reports from the same Dr. Raymond Soneira — that there are visual consequences to using different materials such as sapphire crystal versus glass. Apple has three models, of which one, the Sport model, uses Ion-X glass and the other two use sapphire glass to cover the Apple Watch faces.

DisplayMate has decided to test how both materials perform in ambient light and other conditions, and the results are in. Let me tell you something in advance: the Apple Watch Sport wins, and here is why. 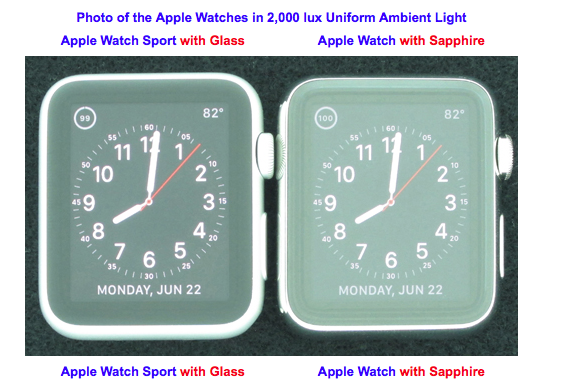 The best thing of all is that both models have the same internals, so internal tweaks won’t skew the tests. After performing different tests to measure screen reflections, brightness and contrast with ambient light, colour gamut with ambient light, and viewing-angle variations, DisplayMate’s Soneira concluded the following: while both watches perform identically in the dark, there is a major difference between the two when put side-by-side in ambient light due to the difference in reflectance of sapphire and glass.

For the Apple Watch Sport with Ion-X Glass we measured the Screen Reflectance to be 4.7 percent, while for the Apple Watch with Sapphire we measured 8.2 percent Screen Reflectance, which is 74 percent higher than Glass. Both values are about 0.6 percent higher than just pure sapphire and glass alone, indicating that Apple has done an excellent job in optically bonding both the glass and sapphire to the OLED display without an air gap.

When measuring contrast ratios, DisplayMate has found that they decrease rapidly with ambient light: At just 500 lux (equal to mid-range indoor ambient lighting), the contrast ratios fall from 100 to 65 for the Ion-X glass and 38 for sapphire, favouring the Sport model, again.

So what this means is that there are two main goals for Apple — if the sapphire glass will hit the iPhone (for example) — to improve the technology it uses in the future: it must work on lowering the reflectance of sapphire, but of course, it has work to do on the glass as well.

As Soneira highlights, Apple has done an incredible job with the sapphire cover, but to make use of sapphire for displays, the industry needs to modify the optical properties of sapphire without significantly affecting its scratch resistance and other positive properties.

The whole study is well worth your time. You can read it by following this link.