Apple’s first Watch OS update landed on Tuesday this week and is supposed to bring performance enhancements. There was a problem though: For some Apple Watch users Watch OS 1.0.1 brought a performance “downgrade”, since the Apple Watch heart rate sensor stopped working in the background, at least consistently, a discussion started on Apple Support Communities reveals. 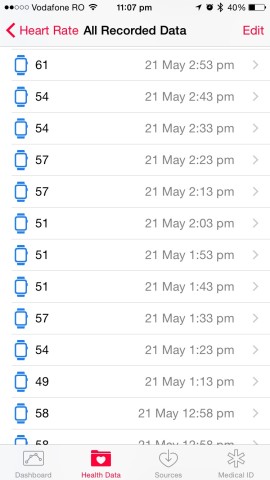 Apple officially states that the Watch should take a reading every 10 minutes. This happens outside the Workout app, as the latter involves different reading patterns. What’s alarming, some users write, is that in some cases the heart rate monitor simply stopped working unless the user launches Glances and asks the device to take a reading.

Interestingly, though, a user nicknamed Wayner 83 says he had the same issues – sporadic monitoring – but that the Watch returned to its original performance on its own, so now it monitors the user’s heart rate every 10 minutes.

Besides those in Apple Support Communities, another discussion on MacRumors forums reports the same issue, as does another on Reddit.

In our experience, we haven’t noticed any heart rate sensor issues since the update. Have you?