Apple has continued to lose share in the global smartwatch market but has kept its position as the global leader in the third quarter, according to data from the International Data Corporation (IDC) Worldwide Quarterly Wearable Device Tracker.

The Apple Watch Series 0 (aka the first-generation Watch) accounted for the greatest volume during the quarter, while the Series 1 and 2 helped little to stop the decline, the market research company says. Apple is estimated to have shipped 1.1 million Watch units in the third quarter, controlling about 41.3% of the global smartwatch market. That compares to the 3.9 million units it was estimated to have shipped during the same period a year ago, which accounted for 70.2% of the market. Hence Apple has recorded a nearly 72% decline in Apple Watch units year-over-year. 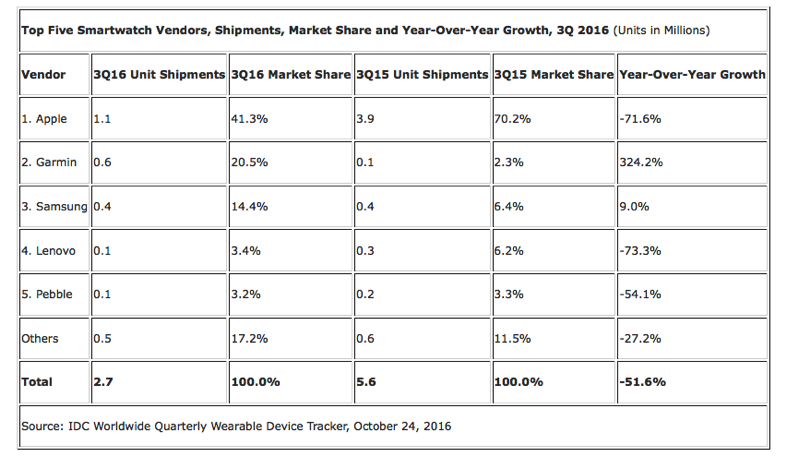 Apple is followed by Garmin, which has seen a tremendous 324% growth year-over-year, shipping an estimated 0.6 million units, up from 0.1 million a year ago. Samsung is in third spot with an estimated 0.4 million shipments, maintaining the same number as last year.

“The sharp decline in smartwatch shipment volumes reflects the way platforms and vendors are realigning,” noted Ramon Llamas, research manager for IDC’s Wearables team. “Apple revealed a new look and feel to watchOS that did not arrive until the launch of the second generation watch at the end of September. Google’s decision to hold back Android Wear 2.0 has repercussions for its OEM partners as to whether to launch devices before or after the holidays. Samsung’s Gear S3, announced at IFA in September, has yet to be released. Collectively, this left vendors relying on older, aging devices to satisfy customers.”

Overall, global smartwatch shipments declined 51.6% compared to last year, according to IDC. In the third quarter, vendors shipped a total of 2.7 million units, which compares to the 5.6 million estimated for the same period a year ago.