To find out how Apple Watch’s step counter and distance tracking accuracy stacks up against the competition, the folks over at CNET have performed a test based on specially designed methodology that reduces variables like device calibration as much as possible. They wore each activity tracker / smartwatch on the left wrist and walked for a mile on a treadmill at the same speed of 3.5mph. Furthermore, the test was performed three times with each device to ensure accuracy. 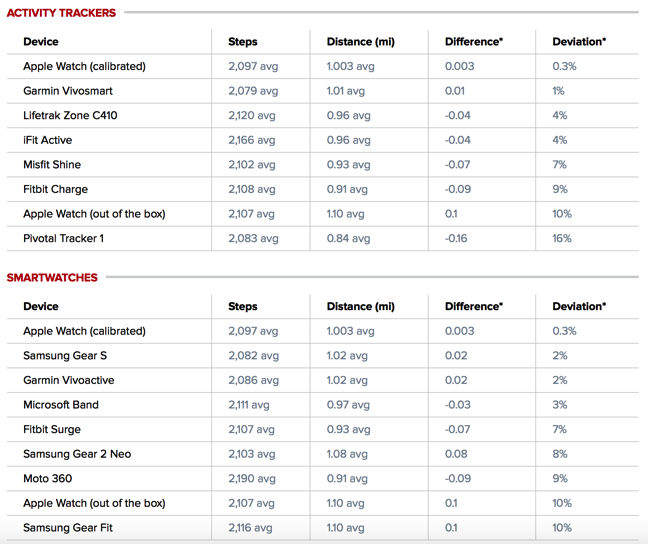 The charts (above) show the results, with steps and distance travelled being the average of the three walks for each device. As you can see, the calibrated Apple Watch is at the head of the pack with a deviation of just 0.33%. The Moto 360, on the other hand, was found to be the most inconsistent device. It is important to note however that its out-of-the-box precalibrated state, the Apple Watch lagged on distance measurement as well.

“While some devices don’t even include a calibration option, most people don’t bother to calibrate those activity trackers and smartwatches that do include the feature. Unfortunately, the calibration method of measuring stride length isn’t all that simple to perform. Apple’s calibration technique, on the other hand, requires a 20-minute outdoor walk with your iPhone. I highly recommend you calibrate the Apple Watch if you care about accuracy”.

Check out the following video that shows you how to easily calibrate and improve the accuracy of results on your Apple Watch: