Apple recently expanded their trade-up program to Apple Watch, offering customers instant credit or an Apple Store Gift Card. The program has widely been available for iPhone and iPad, but now it is available for Apple Watch users in Canada. 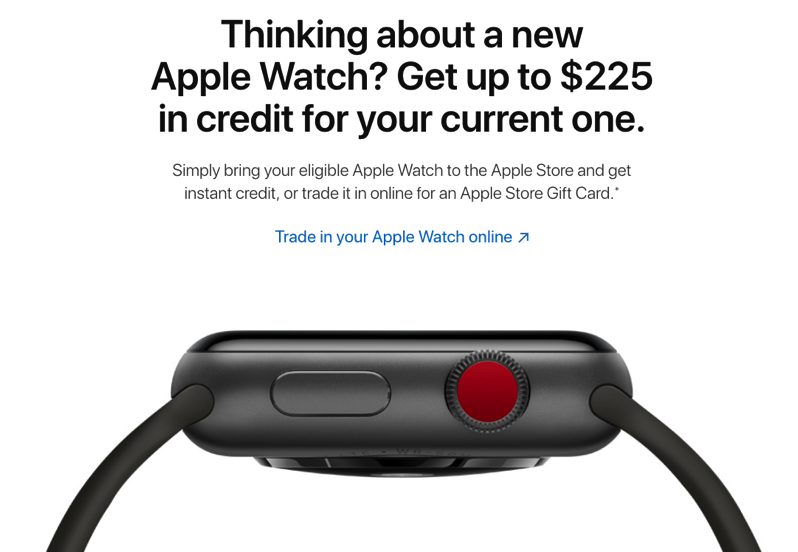 Users have the choice of trading in their Apple Watch at Apple Stores, where they will get instant credit towards the purchase of anything in the store, or trade-up online and get a gift card.

Right now, estimated trade-in values offer up to $225 CAD for your Apple Watch, depending on model. Here are some sample prices of what some models could be worth:

Our Nike+ Series 2 42mm Apple Watch came in with a value of $160 CAD. Of course, the watch is worth much more by selling locally on Craigslist, etc. Do note this is just for the watch itself and not bands, which you will keep.

According to iPhone in Canada reader Gerry, staff at the Apple Store at Upper Canada Mall in Newmarket told him the store is now accepting Apple Watch trade-ins.

Apple is using third party partner Brightstar to handle their Apple Watch trade-in program. These types of trade-in programs are geared for ease of use, for those who cannot be bothered to deal with punters on used classifieds.

Earlier today, it was rumoured an all-new design for the smartwatch is expected to be unveiled later this year, according to one Apple analyst.

Let us know if you’ll be taking advantage of this trade-in program for Apple Watch.