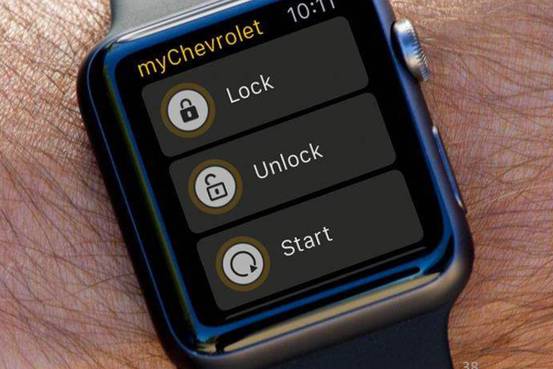 The future is now: General Motors showcased an Apple Watch app today — currently under testing — that allows owners to unlock their cars or start them remotely. The car maker is aiming to ride the latest trend in the car business, which does away with traditional components to operate cars and focuses on technology upgrades (via WSJ).

The catch is that GM’s Apple Watch project builds on technology that has been long held at its OnStar unit. Since 1990, the telematics service has been providing help to customers who lose their keys or lock them in their cars.

Ford is also joining the technology race with an update to the MyFord Mobile app, which includes an Apple Watch app, allowing users to control their cars from their wrists: lock or unlock, control climate in the cabin remotely, check the range and charge status for battery-electric and plug-in hybrid vehicles, and more.

The fact is, GM and Ford are joining a competitive market where they will go head-to-head with traditional car makers such as BMW and startups such as Uber or Tesla Motors.

For those with older cars, Viper has recently launched its SmartStart 4.0, so that might be an option to consider. Or a new car? You choose.