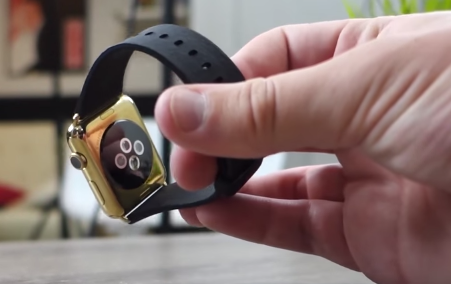 Do you love goolllldddd? YouTuber TechSmartt has shared a new video of Watchplate’s $399 gold plating service for Apple Watch models in stainless steel. The video below details the results of the $399 USD service which will gold plate an Apple Watch in 24k yellow gold (or rose gold):

Watchplate claims a three day turnaround and free shipping (includes international), and will coat any stainless steel Apple Watch model and band. The only issue here at stake is your watch’s warranty, which comes with the following disclaimer by the company, since your watch will be sitting in 3 inches of fluid for 20 minutes:

Will gold plating my Apple Watch void its Apple Warranty?

It is possible. The process involves dipping the watch in about 3 inches of fluid for about 20 minutes total. This is much easier on the watch than Apple’s recommended maximum of 3 ft submersion for 30 minutes. That being said, because this is a new service, we don’t know how Apple’s warrantee policies could change regarding gold plating.

Watchplate says their Los Angeles facility gold plates “over 3 million units a year for our motorcycle business, Fender Guitars and many others.” Their gold plating process is described as a heavy coating of 35 microns, above industry standards of 5-6 microns.

Again, while this looks cool, if you run into any problems with your Apple Watch, Apple will definitely have a case against you for voiding the warranty after it’s been gold plated.

Let us know if you’re going to shell out $399 USD to get your Apple Watch gold plated. Apple Watch Edition starts at $13,000 CAD, but those watches are made from solid 24k gold and are not gold plated.