How to Use the Apple Watch Handwashing Feature in watchOS 7 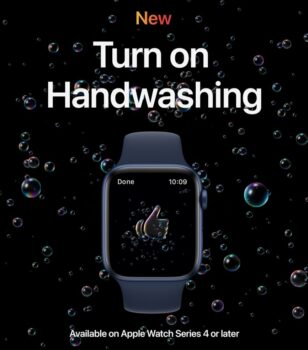 In a recently published tweet, @AppleSupport wanted to inform Apple Watch users of the new Handwashing feature included in watchOS 7, and how to enable it.

Your Apple Watch Series 4 or later with watchOS 7 can help make sure you wash your hands for a full 20 seconds, and remind you when you get home. Learn more: https://t.co/BkmI7jdQpP pic.twitter.com/rbnVINzXfB

20 seconds has been defined as the optimal amount of time you should wash your hands for by health institutes like the CDC and WHO to prevent the contraction and spread of illnesses like COVID-19.

While the handwashing detection used by the feature has been in development for years, the Handwashing feature itself became one of the many ways Apple and its product development team responded to the COVID-19 pandemic and the consequent user needs arising from it, according to Apple’s VP of Human Interface Design Alan Dye in a recent Hodinkee podcast.

In addition, the feature also reminds users to wash their hands at various points throughout their day — when they get home, for example. To enable the Handwashing feature on your Apple Watch, go to Settings > Handwashing, and turn the Handwashing Timer on.