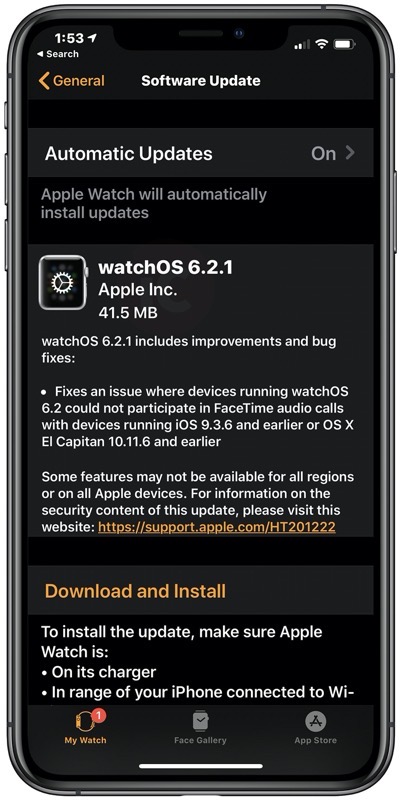 After releasing iOS and iPadOS 13.4.1 yesterday to address a bug with FaceTime, Apple has today released watchOS 6.2.1 that comes with a similar fix.

The update for Apple Watch comes in at 41.6MB and can be installed by opening the Watch app on your iPhone, then going to General > Software Update > Download and Install.

In order to install a watchOS update, your Apple Watch needs to be on its charger and also in range of your iPhone connected to Wi-Fi. The update will install when your Apple Watch has at least 50% battery.

David Smith put his new Apple Watch Ultra to the test, by going on a 98-kilometre hike in the Scottish Highlands: I don’t think you can properly test a device like this without taking it out into the field. So the day my Ultra arrived, I booked myself onto a sleeper train up to the […]
Gary Ng
21 hours ago

Apple's new Crash Detection feature, available on iPhone 14 and the company's latest Apple Watch models, is designed to automatically contact emergency services in the event of a severe car crash.  However, it can sometimes mistake a rollercoaster ride for a car crash (via Reddit). One Reddit user found this out the hard way when...
Nehal Malik
23 hours ago