A new report published by think-tank The Montreal Economic Institute, commissioned by the federal government and published by Nordicity, has concluded Canada’s wireless prices are some of the highest in the world, but these high prices are worth it because of quality of services, details the 105-page report.

Martin Masse, Senior Writer and Editor at the MEI and author of the report, says in a press release “It’s true that consumers pay more every year for their telecommunications services,” adding “But this is because they are switching to higher quality services and buying more of them, not because prices keep going up. The data show that the prices of most telecom services have actually been going down in constant dollars for years.”

The report compared wireless prices in Canada with the U.K., Germany, Italy, France, Japan, the U.S. and Australia. Only Rogers, Telus and Bell were included, but not the flanker brands of the latter incumbents, nor smaller players in other countries, which usually offer cheaper prices. 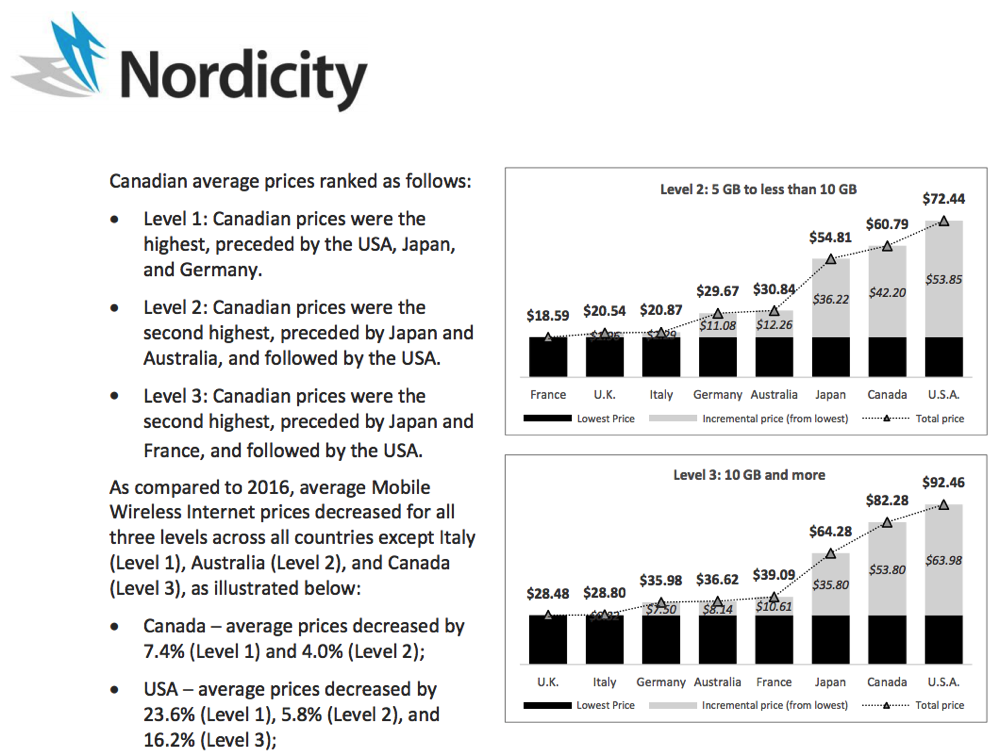 “All consumers don’t pay, and don’t have to pay, the highest prices,” said Masse. “You have choice.”

Mass continues to explain, “Basically, Canadians are paying for a Lexus, not a Yaris,” noting “There is at least as much competition in Canada as anywhere else, and rates correspond to the quality services that Canadians demand and obtain. This is what emerges from a detailed analysis of relevant factors as opposed to a simplistic comparison of a few prices.”

Laura Tribe, executive director of consumer advocacy group Open Media, Laura Tribe, disagreed, as she told CBC News, “Not everyone needs an elite product,” adding “We have expensive; we don’t have affordable.”

Masse told Rogers-owned publication News1130, “If you go from a regular cellphone to an iPhone 8, obviously the regular cellphone doesn’t have a data plan and it’s very cheap. The wireless plan for a smartphone is much more expensive but you get many more services.”

He went on to say “This is the problem when you just compare raw numbers without looking at what you pay for. In Canada have one of the best networks in the world, we have the fastest speeds and our companies are among the ones that invest the most in the advanced technologies,” noted Masse.

As for wireless companies in Europe offering lower prices compared to Canada? “They have lower prices but they don’t invest much, their companies are not really profitable, and they are still trying to recoup their investments from older technologies,” concludes Masse.

Last week, Finland-based agency Rewheel released a report which noted Canadian wireless pricing is some of the highest in the developed world.

What do you think? Is it worth it paying more for a high quality network? Also–what’s wrong with a Yaris?