Canada’s Wireless Data Prices Some of the Most Expensive in the World: Survey 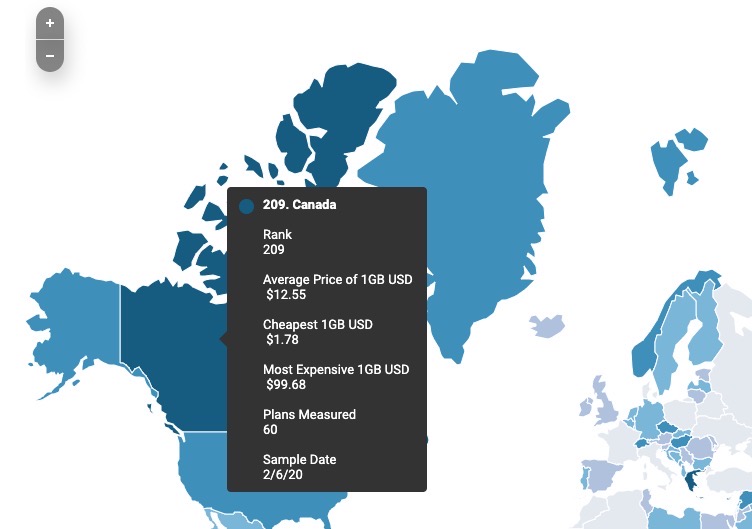 Data from a new British survey says Canadian wireless prices for 1GB of data rank as some of the most expensive in the world.

According to recent data from Cable.co.uk, over “5,554 mobile data plans in 228 countries were gathered and analysed” from February 3-25 of this year. A worldwide mobile data pricing table was then created in regards to the cost of 1GB of data.

The global average for 1GB of data is at $5.09 USD according to the company’s research and Canada’s average pricing is more than double that.

Canada ranked 209 out of 228 countries when it came to wireless pricing for 1GB of data, while the United States ranked 188 in the world. A lower ranking means a more expensive price for 1GB of data.

“It’s notable when looking at the global league table how far down it you have to read before you get to Canada and the United States. The largest and richest North American nations are ranked 209 and 188 in the world in terms of the price of mobile data with 1GB costing an average $12.55 in Canada and $8.00 in the US,” explains the survey.

According to the Calgary Herald, Canada was the only G7 country that saw its average data rate price increase from 2019 to 2020.

OpenMedia told the publication said Canadians already know wireless prices are high when compared to other carriers around the world, and these findings are nothing new.

Laura Tribe, the advocacy group’s executive director, said “The thing that’s really frustrating right now is just how critical internet and communications tools are in a pandemic when you’re encouraging people to stay home, social distance, work from home, do schooling from home.”

“It’s just not plausible that prices have increased — that’s simply a sampling error,” he told the Calgary Herald. “More than anything, it’s a demonstration of the challenge of doing international comparison.”

The federal government has reiterated numerous times it will lower cellphone bills by 25% as part of its re-election promise, by December 2021.

Update July 28, 2020: A Telus spokesperson reached out to iPhone in Canada, with a statement in regards to the Calgary Herald article, saying:

Canadian pricing is competitive with other G7 jurisdictions when recognizing important elements like speed, quality, geography and climate, as has been proven by independent reports from NERA Consulting Group, PricewaterhouseCoopers and others. Additionally, reports published by the federal government itself have also confirmed that wireless prices have declined significantly in recent years: according to the CRTC’s 2019 Communications Monitoring Report (CMR), the cost of mobile services in Canada declined by as much as 35 per cent between 2016 and 2018, while the CRTC’s December 2019 CMR concluded that the cost per GB has decreased by 28% from 2017 to 2018. When considered alongside other independent reports, these findings clearly indicate that wireless costs are declining for consumers and have been for some time.

The Canadian Radio-television and Telecommunications Commission, the country’s broadcasting and telecommunications regulator, announced on Monday morning its website and phone lines are down for the count, in what appears to be an unscheduled outage. “Please note that our website, its related applications and phone lines are temporarily unavailable, we will update you as soon as […]
Gary Ng
23 mins ago