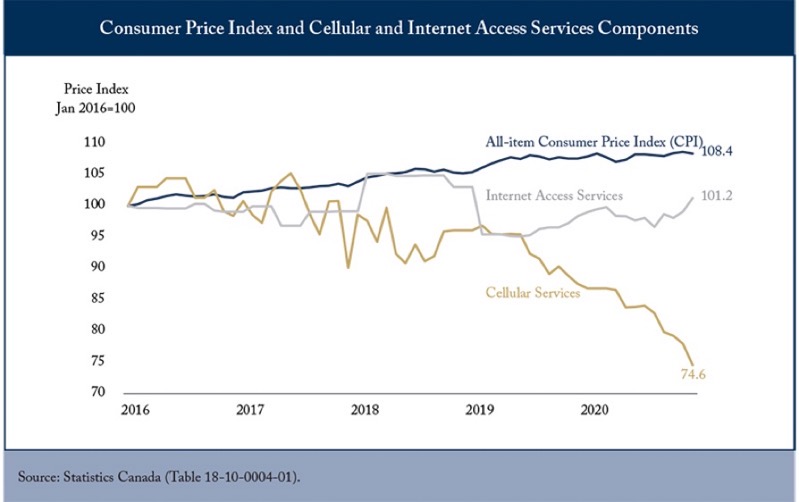 On Wednesday, the C.D. Howe Institute released its Communiqué #3 from its ‘Crisis Working Group’, titled “Will Mandated Access to Infrastructure Jeopardize CRTC’s Ability to Balance Competition and New Investment?”.

In a nutshell, C.D. Howe says “cellular services have seen a 25 percent price drop over the past five years, a decline that aligns with Ottawa’s promised wireless rate cut.”

Prime Minister Justin Trudeau’s Liberal government ran on a re-election platform touting it would drop wireless prices by 25%, but only for data buckets of 2GB to 6GB. So far, all we’ve received are period updates on price changes.

C.D. Howe says the tracking of prices by Innovation, Science and Economic Development (ISED) Canada “may lack accuracy and validity,” as “accurately assessing prices across time and jurisdictions for telecommunications involves resolving differences across tiers for service and bundled pricing for a diversity of consumer profiles,” it explains.

Instead, the report says prices should be from Statistics Canada’s reporting, “which is methodologically robust and based on solid empirical work.” The conclusion from data based on the latter is “cellular services have seen a 25 percent decline from January 2016 to December 2020,” according to Canada’s consumer price index.

The C.D. Howe report was touted by wireless carriers, as numerous retweeted the study on Twitter (such as Rogers). But critics of the report were quick to chime in to doubt its claims.

Here are the CD Howe working group members that the minister responsible for telecom is choosing to believe on wireless bills over millions of Canadians who say otherwise. https://t.co/zxXDo4KNBG pic.twitter.com/lFuQ38h0HS

Wow. This is one area where my experience doesn't match the data. Can you even get a decent cell plan for less than the $75/month the Big 3 have colluded on? https://t.co/qKfJg2Tjyc

Even the current ISED Minister, François-Philippe Champagne, touted the report as “great news”, which many disagreed with, such as consumer advocate and non-profit OpenMedia:

Do not be blinded by lobbyists. Prices that consumers pay continue to rise, incumbents continue to brag to shareholders that APIU is rising.
Package 1: $60 for 5GB. $12/GB
Package 2: $70 for 10GB. $7/GB
Price per gig drops 42%
Monthly cost to consumer up by 16%.#CRTC

Those responsible for this report criticize the methods used by @stats_canada to calculate price levels when it works against their interests, and laud them when it advances their cause. Consult independent research when making important decisions please.

And the list goes on. Why is our government trumpeting a study produced by a working group largely staffed by telecom execs?

What does "continue to push" even mean here? You haven't taken action – the push never started! https://t.co/JSNZAHNwnt

With all due respect, this rpt from @CDHoweInstitute is not worthy of your attn. It's findings are selective & hardly anything to celebrate. For one, rates are falling in most @OECD countries & faster than in Canada. In terms of adoption, Canada is 32nd of 37 OECD countries. pic.twitter.com/yv2ZbJs7bc

High prices & restrictive data allowances are also limiting how CDNs use the mobile Internet. Mobile date usage in Canada avg 2.9GB/mo/user. This is 1/2 the OECD avg & 1/3 9.2GB/mo/user in the US). We're at where the OECD avg was 2 years earlier and where the US was 5 years ago. pic.twitter.com/FK9CsWHoil

Bell, Telus & Rogers often refer to @OpenSignal in their ad+PR+GR campaigns to tout how "we are #1" for mobile wireless network speeds. They are right on 1 metric: download speed (for Telus only). Telus is top-the-league. https://t.co/6FHQN7TZo8 pic.twitter.com/JPHeQvCyVv

Earlier this month, Rogers announced it would acquire Shaw in a $26 billion deal still yet to be reviewed by regulators. The move would eliminate Freedom Mobile as a viable fourth wireless player and many have noted the merger would result in higher prices for consumers.