Earlier this month Fido, along with Koodo and Virgin doubled the voice minutes and data for specific plans, and in Fido’s case it was their Smart Plans. Alongside these ongoing promos Fido is offering the first month free (for month to month users) and also three months free, for those that sign a two year agreement.

Fido has updated its website today to extend the 50% off for 3 months promo and first month free until April 1st, 2013. These credits were originally set to expire today. So if you were ever considering a two year agreement, the first three months free promo is still available.

Offer available until April 1st, 2013, subject to change without notice. Available only on in-market Standard plans with a new 2-year Fido Agreement. Discount applies only to monthly service fee of plan for the first six months; all other fees not discounted. 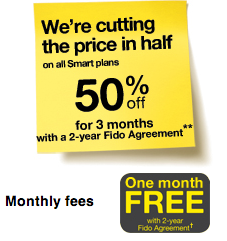 Some users have signed two year terms to acquire free subsidized handsets, only to sell them to recoup costs towards an unlocked iPhone purchased from Apple. Some notable Android handsets such as the HTC One S and Galaxy S II LTE are worth $425-$450 outright from Fido, but can be sold privately for upwards of $300 on Craigslist or eBay, or sometimes higher if you can provide an unlock code.