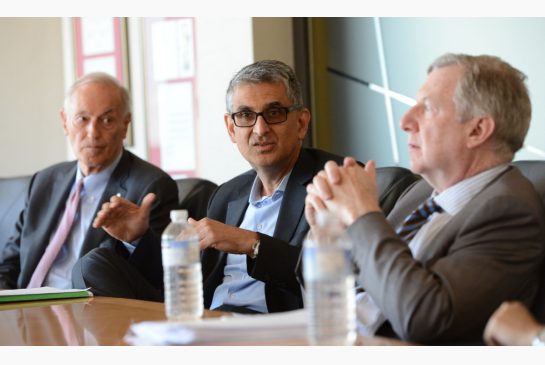 Image via The Toronto Star

The media war has ensued by our wireless incumbents to sway public opinion in their favour about the Federal Governement’s actions to introduce a fourth wireless carrier in Canada, in this case, Verizon from the U.S.

Members of the Rogers executive team met with the Toronto Star’s Editorial Board to discuss actions Ottawa is doing to court Verizon.

According to Philip Lind, regulatory vice-president and vice-chair of Rogers, he claims federal government officials flew to New York City ‘offering favours’ to Verizon to enter Canada’s wireless foray. Lind says “everything that they could possibly ask for they’re doing for Verizon.”

Rogers CEO Nadir Mohamed added “without favours we know they would not be coming,” as according to him, U.S. wireless companies originally did not want to compete in Canada, but after Ottawa approached them, “now (Verizon is) exploring options.”

Again, Mohamed echoed the answer for Canadians is not a fourth wireless carrier:

“Ultimately maybe the answer isn’t a fourth player, it’s something else,” Mohamed said, adding that “a certain amount of light regulation . . . will provide checks and balances.

“Yes, there are flash points; nobody’s suggesting the market is perfect. (But the) solution contemplated offers a worse situation,” he said, adding that market conditions for the consumer “are significantly better than five years ago.”

As for these improved market conditions for the consumer, Mohamed says they are the result of organic market forces and would have occurred even without discount wireless entrants like Mobilicity.

Mohamed also said the improvement is primarily a result of organic market forces, and would have happened for the most part without the arrival of discount rivals such as Mobilicity. He ended with: “We have to win in markets,” he said. “There’s no going back.”

Industry Minister James Moore did not comment, but earlier an spokesperson said the following to the Star:

“Our view has been clear, we want effective competition across Canada…Greater competition means better prices for Canadian consumers.”

Our wireless incumbents have argued the arrival of Verizon would not be fair since the latter is not on the same level playing field when it comes to the upcoming wireless spectrum. Bell’s CEO took out a two-page advertisement in the Toronto Star yesterday to write a compassionate plea to Canadians warning them against Verizon. Rogers has long claimed a fourth wireless carrier is unnecessary and unsustainable in Canada, while TELUS has said a “bloodbath” would ensue if Verizon entered wireless spectrum bidding.

Do you want Verizon to come to Canada? Or should it stay out like what our incumbents are suggesting?

Rogers's President of Integration, Dean Prevost, accidentally revealed during a Competition Tribunal hearing against Canada's Competition Bureau on Thursday that he is set to receive a $2 million bonus if the company's proposed $26 billion acquisition of Shaw Communications goes through — reports the Hanna Herald. This figure had previously been confidential but slipped out...
Nehal Malik
14 hours ago

Shaw Communications CEO Bradley Shaw told the Competition Tribunal on Wednesday that it was "extremely difficult" for the Shaw family to give up the business and agree to Rogers's proposed $26 billion takeover of the company (via Financial Post). Canada's fourth-largest telecom operator has been a family affair since its inception. Bradley Shaw took over as...
Nehal Malik
17 hours ago