Honorable James Moore, the Minister of Industry, released a statement today reaffirming the Federal Government’s decision to “stay the course” in regards to its wireless policies, such as welcoming a foreign carrier as a fourth wireless player. 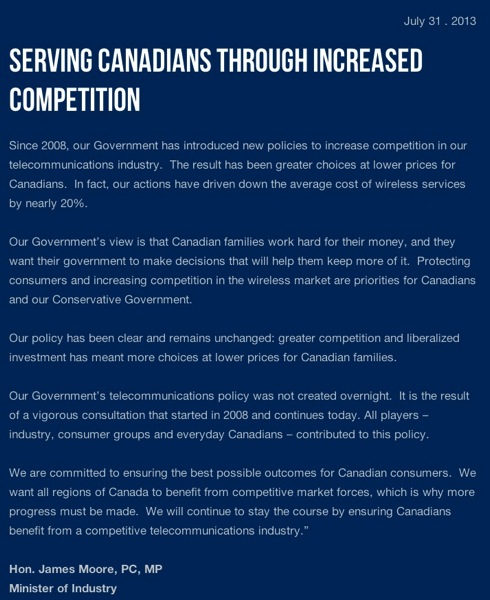 Moore notes since 2008, the Government’s decisions have “driven down the average cost of wireless services by nearly 20%,” and goes on to say their view is to continue to protect consumers and increase wireless competition. Below is an excerpt from his statement:

“Our policy has been clear and remains unchanged: greater competition and liberalized investment has meant more choices at lower prices for Canadian families.

Our Government’s telecommunications policy was not created overnight. It is the result of a vigorous consultation that started in 2008 and continues today. All players – industry, consumer groups and everyday Canadians – contributed to this policy.

We are committed to ensuring the best possible outcomes for Canadian consumers. We want all regions of Canada to benefit from competitive market forces, which is why more progress must be made. We will continue to stay the course by ensuring Canadians benefit from a competitive telecommunications industry.”

Bell’s chief legal and regulatory officer, Mirko Bibic, responded to the Minster’s statement via the Globe and Mail:

“We certainly agree that competition is a good thing. We welcome it. But we’re astonished the minister didn’t address the loopholes that give start-up advantages to giant U.S. wireless incumbents. Given the significance of the issue to a critical Canadian industry, to rural wireless deployment, to the wide range of Canadian groups and individuals that have expressed concern, it’s truly perplexing that the government is ignoring the issue,”

“How does it really make any sense to say Verizon can buy two blocks of [700 MHz] spectrum and Rogers can only buy one? I just don’t think they’ve ended up in a logical, common sense place and I think Canadians need to hear about that.”

“Minister Moore’s confirmation that the government is resolutely committed to long-term, viable wireless competition in Canada is great news for Canadians.”

Despite ongoing ad campaigns to sway public opinion by Rogers, TELUS and Bell, it appears Moore is not backing down from the Government’s plans to bring in a foreign carrier like Verizon to make the industry more competitive. Regardless what Canadians are told by incumbents on how they will be affected, Ottawa remains unfazed.

Here are the latest Canadian cellphone plan and device deals, plus other promos from wireless carriers such as Rogers, Telus and Bell, from our partner PlanHub. As always, the promos may change at the last minute, but here they are as of Wednesday, October 5, 2022. Check them out below… Bell Noticeable price changes: Get a […]
IIC Deals
19 hours ago