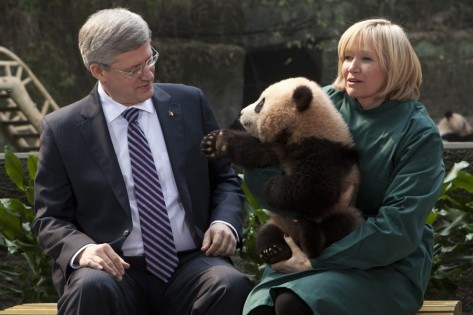 According to an interview with Prime Minister Stephen Harper, Canada.com reports our country’s leader has denied giving U.S. carrier Verizon an unfair advantage over incumbents, speaking in Toronto yesterday:

“The reality of the situation here is there is no special rule or special loopholes for foreign companies,” Harper said.

“There are rules that assist all new entrants, whether they be Canadian or foreign, to enter the marketplace and provide competition that will be in the interests of Canadian consumers.”

Harper also indicated the Conservative government will bring to light any “misinformation” about its plans, a subtle jab at the ongoing multi-million dollar ad campaign Rogers, Telus and Bell have been blanketing Canadians with, seeking support against Verizon and Ottawa’s wireless rules, deemed unfair:

“and we will certainly ensure that any misinformation that is being said about these particular rules are corrected and Canadians fully understand the reality of the situation.”

The Prime Minister has previously stated the government will not change its policies to adhere to the growing concerns of incumbents.

Bernard Lord, president of the Canadian Wireless Telecommunications Association (CWTA), questioned Prime Minister Harper’s claims and insisted loopholes exist in the wireless spectrum rules. Lord went on to say they have the support of Canadians, who do not support unfair advantages for foreign companies, made possible by “government interference” within the wireless marketplace:

“In his own comments the prime minister acknowledges there are loopholes. He just says they’re not for foreign companies, they’re for all new entrants,”

Verizon has been rumoured to be in talks with Vodafone to buy out the latter’s 45% stake in the company, which according to some analysts would allow the former “more strategic flexibility” in its plans to enter Canada and participate in the upcoming wireless spectrum auction.

Xplore, formerly known as Xplornet, announced on Thursday it has doubled internet speeds in New Brunswick. Previously, internet download speeds were at 50 Mbps, but they are now at up to 100 Mbps for over 21,000 homes and businesses in the province. “As our home province, New Brunswick has been our launching ground for next-gen […]
Gary Ng
1 day ago