We have some fantastic news folks! Some of you maybe have already heard about this, but for those who haven’t, we have some more incredible news from our friends at Rogers. Okay, it’s not incredible news, I lied. Let’s get down to the nitty gritty. Maybe this post could be known as the big #17? Four things to address today:

1. Rogers Will Be Removing the Dreaded System Access Fee!

For those on monthly voice plans, you’ve been paying an extra $6.95 (plus tax) every month since the day you were born. The system access fee (SAF) started out as a government fee that consumers paid to help finance the start up of wireless carriers in Canada.

Well, after years of consistent millions of dollars in yearly profits, it’s safe to say the SAF is pretty much useless. It’s now considered a blatant money-grab, and so much that there’s a massive class-action lawsuit over it (up to $20 billion is at stake!). 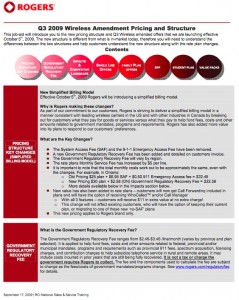 The SAF will be eliminated on October 5th. That’s awesome right? Nope! Why? Because now Rogers is replacing it with a “government regulatory recovery fee” (GRRF). WTF? That was my exact thought when I read about this. The GRRF will range from $2.58 to $3.46 depending on your province. I love how they added “Government” to the fee even though it’s NOT. It just makes us believe our government is behind all of this.

Not sure how they calculated these random numbers, but according to Rogers they “did not remove the SAF and replace it with the GRRF”.

What did they do then? According to Rogers they have “applied a new simplified billing model and responded to customers’ preferences to include higher value in new price plans.” I get it now…oh wait, no I don’t. This random Rogers white noise makes absolutely no sense. More random PR dribble, that just continues to confuse Canadian wireless customers.

You didn’t think Rogers would be trying to SAVE you money right? Think again! Rogers is increasing ALL of their monthly voice plans by $5 for new users! Rogers is declaring this $5 increase for new subscribers as “revenue neutral”. 🙂

So let’s get this straight: the SAF is eliminated, the GRRF is introduced, then monthly plans are increased by $5. So a $25 monthly plan would look like this…

You actually won’t be saving–you’ll be PAYING $0.13 more! That’s nothing, but it’s the principle here. Why pay more? But wait…Rogers had decided to throw in a BONUS.

4. Rogers is Including Call Forwarding, WhoCalled, and Call Manager for FREE!

What? Free you say? Yes, that’s right. Call forwarding ($3 value), WhoCalled ($3 value) and Call Manager ($5 value) will be included for free if you choose to opt them in on these new “non-SAF” plans. Rogers claims this added $11 value more than compensates for the removal of the SAF and added GRRF–giving extra “value” to consumers.

I received an email from a Rogers’ Manager of Social Media and Digital Communications via email, detailing the added changes above. I asked him what was Rogers thinking to remove the SAF, only to replace it with the GRRF and $5 monthly voice plan increases?

His response? He just mentioned the plans work out to be “about the same”. My question: if it’s the same, why go to all this trouble to remove the SAF and implement the GRRF?

I also remarked the following about the $11 worth of bundled services: “As for these three new “offerings”, they are not worth $11 to consumers.” His response to this was “why do you say this about the $11 services?”

Why? Well because you have to be out of your mind to pay $11 for those services. They are not worth $11 at all as they should be included in the first place at best, considering how expensive it is to own a monthly plan with Rogers. It’s clear these $11 services are being used to blind people from the truth.

I remember when Caller ID was a petty $3-5 add on. Now it will cost you an expensive “value pack bundle” to get it. Is anyone out there actually happy with any of these three services above (and you are paying for them)?

Summary Of These Rogers Changes to the System Access Fee, Etc.

If you were too lazy to read my ramblings above, here’s what you need to know:

Rogers removed the government initiated System Access Fee…
…only to replace it with the Government Regulated Recovery Fee…
…and then increase all monthly plans by $5…
…and throw in Who Called, Call Forwarding, and Call Manager, free of charge for new monthly subscribers–and market it as $11 worth of free services.

These new Rogers changes DO NOT apply to Fido customers. I believe the following sums up what Rogers is trying to do quite accurately:

Carmi Levy, an independent technology analyst, said Rogers’ decision to replace an opaque fee with a more specific one is likely based on the notion that it will be easier for subscribers to swallow.

“The more clear you can make it to customers what goes into a monthly fee, the greater the chance they will accept the fee,” he said, noting that gas stations and airlines have broken out government charges in their pricing for years.

“But let’s not make any bones about it, you’re not going to end up paying less at the end of the day if you are a Rogers customer.”

Phew. That was fun. Have fun voicing your thoughts on this in the comments! Anyone here going to switch to the new “non-SAF” plans to get three free services? 😉

Thanks Jason T. for the early heads up!