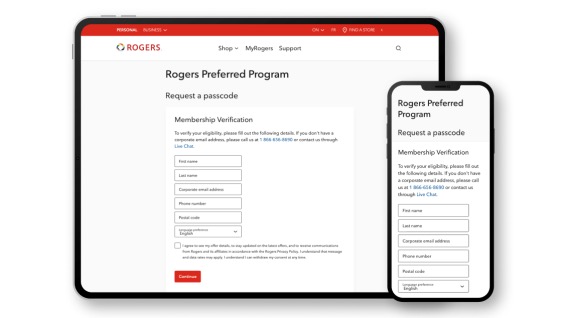 If your employer offers corporate discounts for wireless plans, you may want to check out the latest from the Rogers Preferred Program (RPP) online portal, or known as EPP.

The latest Rogers RPP plan for November 2021 includes a bring your own device (BYOD) plan of $50/20GB, one of the company’s Infinite plans, according to documents seen by iPhone in Canada. This is a discount of 30% off the regular retail price, says the Rogers RPP online portal. Right now, this plan would cost $80/month on Rogers.com.

This shareable data plan offers 5G speeds for 20GB and data afterwards is throttled to 512 Kbps. You get unlimited Canada-wide calling and unlimited SMS/MMS.

Rogers and Shaw today announced an extension of their proposed $26 billion merger, along with the sale of Shaw-owned Freedom Mobile to Quebecor’s Vidéotron in a side deal that's part of the broader transaction, to February 17, 2023. "All parties remain committed to the pro-competitive transactions, which will deliver significant benefits to Canada and Canadian...
Nehal Malik
5 hours ago