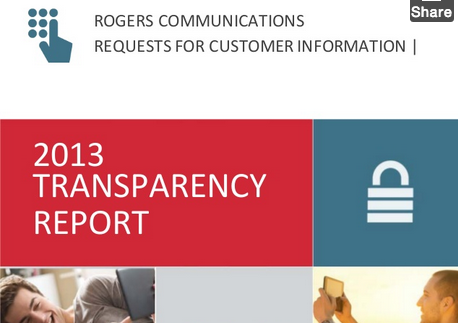 Rogers is the first of the ‘Big 3’ carriers in Canada to release a transparency report, which details the data requests the company receives from various government agencies and authorities, such as the RCMP, CSIS, CBSA, CRA and other provincial and municipal agencies like police departments and coroners.

In a post on the Rogers Redboard, Ken Engelhart, the company’s Chief Privacy Officer, answers a few questions about transparency and about the report released. Here’s a snippet:

Ken, why is Rogers releasing a Transparency Report, and what is it?

We know some customers are concerned about government and law enforcement agencies getting access to their information. We want customers to know their info is in good hands. That’s why we’re releasing a Transparency Report.

Essentially it’s a report to our customers about the number of requests we received last year from government and law enforcement agencies, how we respond and what information we provide.

How do you handle these requests? Do government and police authorities tap in to your databases?
We don’t provide direct access to our customer databases.

We carefully review requests to ensure they’re legally valid and not overly broad, and then our staff provides the information securely so that only the government or law enforcement agency requesting it can access it.

The reports reveals in 2013, the company received 175,000 requests, consisting of the following:

Rogers says by law they are required to keep customer bills for seven years but does not keep items like text messages or emails. The carrier says they will ‘push back’ if requests are too broad and even go to court to protect customer data, but does not disclose how many times that has happened. You can check out the full report here.

Earlier in April, it was revealed government agencies ask telecoms in Canada for private data well over 1 million times per year, according to Canada’s Interim Privacy Commissioner Chantal Bernier.