Rogers/Fido No Activation Fee Until February 16 2010

Effective February 11, 2010, Rogers and Fido are waiving the $35 activation fee that customers are usually charged when starting up a new account.

This promotion is part of the Rogers/Fido Valentine’s Day promotions, but considering the negativity surrounding these companies lately, does a $35 discount even work? 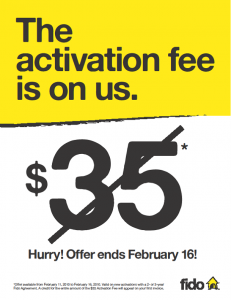