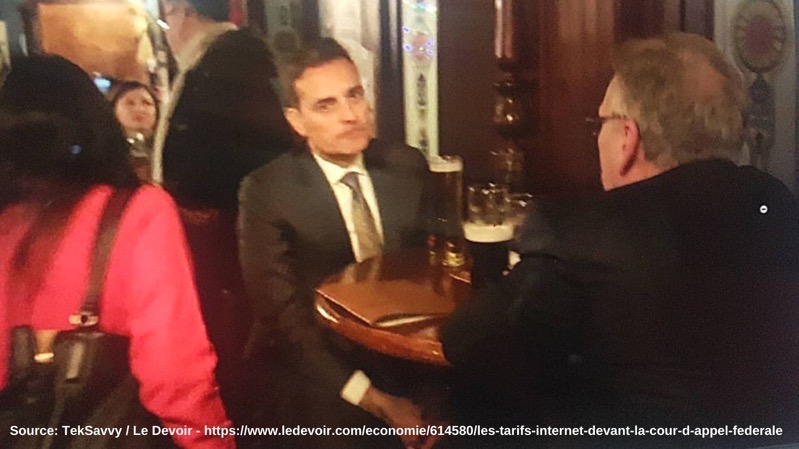 Specifically, TekSavvy mentions Bell’s Mirko Bibic meeting with Scott, back in December 2019, when the former was the COO of the telco (and now CEO) at a popular pub in Ottawa, Ontario. The meeting transpired “just one week after the CRTC opened an active file to hear Bell’s application to reverse the 2019 Final Rates Order, which the regulator recently arbitrarily approved,” explained TekSavvy.

TekSavvy has now also published an image of Bibic with Scott at Darcy McGee’s pub in Ottawa, which you can see below (the image was shared with Le Devoir):

Say, "captured!" 📸 Pictured below are Bell CEO Mirko Bibic & @CRTCeng Chair Ian Scott out for beers in Ottawa in Dec '19, just a week after Bell filed its appeal of the CRTC's 2019 wholesale rates.🙃 #CRTCbeers #cdnpoli

Just bad optics when the head of Canada's biggest coms & media conglomerate (BCE) & #CRTC boss get chummy over beers at Darcy McGees. The #CRTC under Scott has refused to let policy analysts visit my class supposedly b/c of perceived conflicts of interest. https://t.co/4lwxgzNTqB

“After years of litigation and delay, it is now clear that the solution to this fiasco rests with Cabinet. Cabinet must reinstate the CRTC’s pro-consumer 2019 Final Rates Order, which was based on years of process, mountains of evidence and withstood three challenges,” said Andy Kaplan-Myrth, TekSavvy’s VP of Regulatory and Carrier Affairs, in an issued statement.

“We also believe Cabinet must apply the same standards of conduct to Mr. Scott as it has to another Commissioner it terminated in the past. While we await Cabinet’s ruling, we will continue to use every legal means available to us to overturn the CRTC’s arbitrary, anti-consumer decision,” added Kaplan-Myrth.