“The average 5G download speeds of our Canadian users on Telus and Bell are closely matched with speeds averaging just above 165 Mbps — their statistically tied 5G Download Speed scores are 165.6 Mbps and 166.2 Mbps, respectively,” said Opensignal.

As for Rogers, Opensignal said their users “experienced 5G Download Speed of 106.1 Mbps, on average — at least 59.5 Mbps slower than Bell and Telus.”

Despite the 5G speed differences between Canada’s ‘Big 3’, when it comes to 5G signal availability, Rogers, Telus and Bell are “statistically tied”, with scores between 8.2 and 8.7%.

When it comes to 5G video streaming, Telus and Bell again tied for first, while Rogers was slightly behind in third, with all three wireless carriers scoring in the ‘Excellent’ category with 75 points and higher out of a 100-point scale.

You can check out the 5G scores for Canada below…there’s not a lot of distinguishing between the ‘Big 3’: 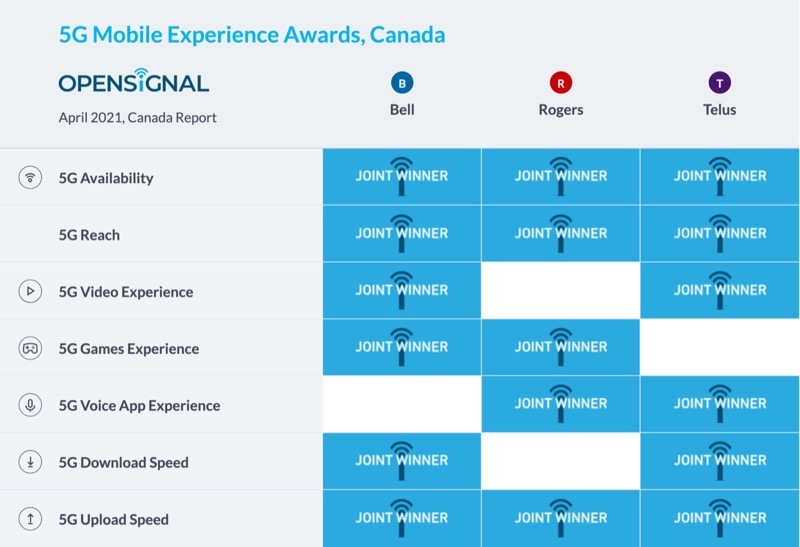 [caption id="attachment_382081" align="aligncenter" width="1000"] Image: Bell[/caption] As Hurricane Fiona makes landfall in Atlantic Canada, telecommunications services are more instrumental than ever in ensuring that Canadians can stay connected with their loved ones and emergency services. To that end, Industry Minister François-Philippe Champagne is organizing telecom operators in the impacted areas to "ensure their services are...
Nehal Malik
16 hours ago