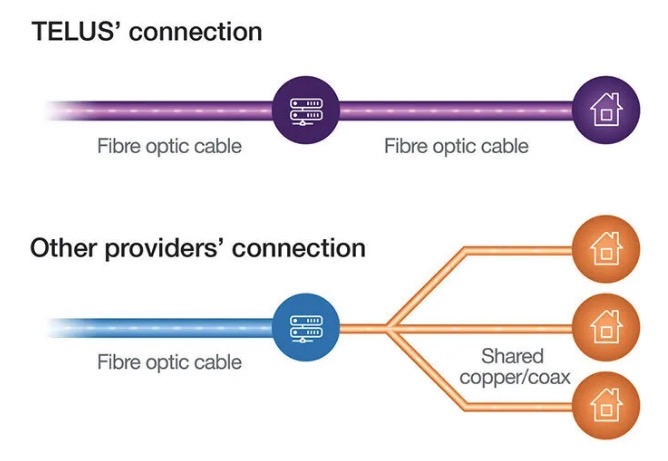 Telus announced on Wednesday its PureFibre X internet service is now available in Edmonton, Alberta, along with the Lower Mainland and Fraser Valley in British Columbia.

“We are proud to be the first major Internet provider in Canada to deliver this powerful connectivity to our customers’ homes, particularly at a time when our customers need to learn, work, or operate their businesses from home,” said Zainul Mawji, Executive Vice-president and President of Home Solutions and Customer Excellence, in a statement.

Telus says its PureFibre network offers 100 pure fibre-to-the-home, and the company’s website emphasizes this when comparing its advantages over western Canadian rival Shaw.

“PureFibre X unlocks the future potential for connected homes and gives immersive technologies, such as augmented and virtual reality (AR and VR), the capability to reach its full potential,” added Telus in its press release.

After Koodo launched a $45/50GB promo plan for Black Friday today, Rogers-owned Fido has now matched this offer. That’s according to reliable mobile insider ‘Thatdealguy’ on RFD, who noted the matching offer from Fido also is eligible for additional gift cards and rewards points bonuses at retailers such as Walmart, Best Buy, The Mobile Shop […]
IIC Deals
3 hours ago