Videotron has announced a new free Unlimited Music for its mobile subscribers, to allow them to stream Stingray, Rdio, Google Play, Deezer and Spotify without using their data plan. The announcement was made this morning at a press conference at the Phi Centre in Montreal.

Myrianne Collin, Senior Vice President, Strategy & Marketing of Videotron, said in a statement this new feature is “just the beginning” and with “This launch, a ground-breaker in Canada, reaffirms our commitment to offering the most innovative mobile service anywhere.” 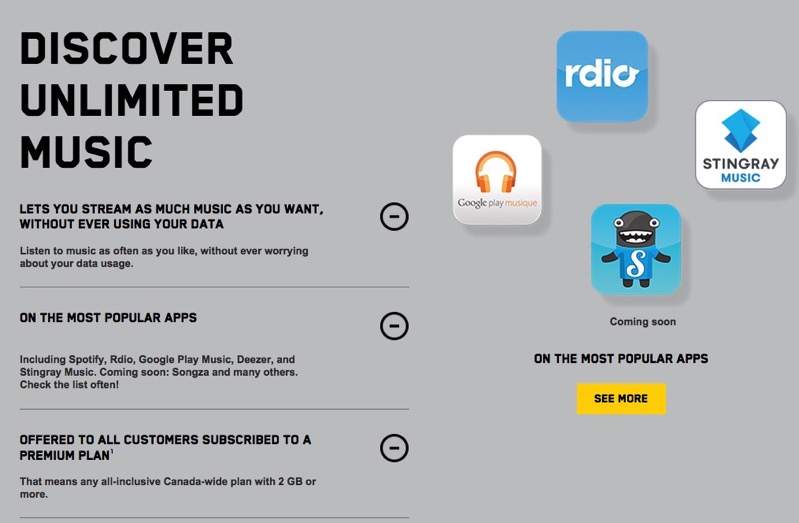 The company also announced today their mobile customers will have access to exclusive Stingray channels, through a new customized app made for Videotron customers.

Other music services coming soon include Songza, while the company notes “other popular services” will soon be added as well.

Earlier this year, the CRTC banned wireless carriers from subsidizing data for mobile TV apps, singling out offerings from Videotron and Bell. It is unclear if subsidizing music data falls into that same category, of offering “undue preferences or advantages” as CRTC chairman Jean-Pierre Blais called it.

We reached out to Videotron and inquired if Apple Music would be supported anytime in the future, and a representative responded via email they’re in talks with Apple. So this is a good sign for iOS users.

Let us know if you’re going to be using Videotron’s new Unlimited Music service with your existing music streaming apps.