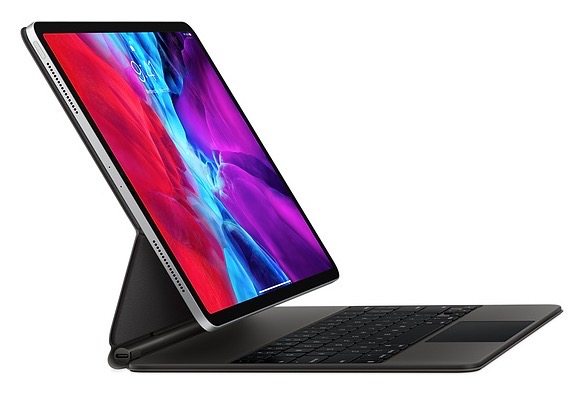 The Apple Magic Keyboard case has a faint Apple logo on the back. The keyboard itself is “pretty heavy”, while the USB-C port on the side is only for charging and does not respond to accessories plugged in.

When you open the Magic Keyboard, it snaps in place at about 85 degrees, then the new hinge lets you angle the screen. It doesn’t go too far back to cause the iPad Pro to fall off your lap or on a table, says MrExitStrategy, saying the weight distribution is very good.

As for the trackpad, it was described as “pretty responsive” and does have a physical click throughout. There does not appear to be a haptic mechanism but it sounds and feels like a button click.

As for typing, it was described as “pretty great” and better than the previous Smart Keyboard Folio for iPad Pro. “Best experience I’ve had on an iPad as far as typing goes,” explains the quick review, while in regards to gestures on the trackpad, they also “work perfectly”.

Apple launched sales of the Magic Keyboard earlier this week, with prices in Canada at $399 and $449 for the 11-inch and 12.9-inch models respectively.