According to The New York Times, a vintage Apple-1 computer made in 1976 has sold for a record $671,400 (including taxes and fees) to an anonymous wealthy Far East entrepreneur at a German auction. The previous high was $640,000 for a similar sale back in November at the same auction house in Cologne. 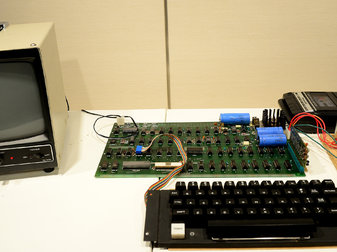 The original owner of this auctioned off Apple-1 was a retired electrical engineer by the name of Fred Hatfield living in New Orleans, as he verified this to the NYT by showing a letter addressed to him from 1978 signed by Steve Jobs, which detailed an offer to exchange an Apple II computer for the older machine with an offer to send a $400 check as incentive.

Hatfield says he was approached by an interested buyer earlier this year to purchase his Apple-1, which was not in working condition, for $40,000. That buyer went to California and had the Apple-1 autographed by Steve Wozniak who designed the computer.

When told of the record auction sale Hatfield said “My God,” and went on to say “Best to him. He’s the one who fixed it up and figured the best way to sell it for all that money. Evidently, he’s very good at this.”

As noted in the Steve Jobs biography written by Walter Isaacson, Steve Wozniak said he made history with his early computer prototype, which had its software handwritten by Wozniak himself:

After a couple of months he was ready to test it. “I typed a few keys on the keyboard and I was shocked! The letters were displayed on the screen.” It was Sunday, June 29, 1975, a milestone for the personal computer. “It was the first time in history,” Wozniak later said, “anyone had typed a character on a keyboard and seen it show up on their own computer’s screen right in front of them.”

The Apple-1 originally sold for $666 ($2,700 in today’s dollars). Now that’s one expensive computer. Check out the video below: