More Than 5,000 SpaceX Starlink Terminals Are Now Active in Ukraine

The SpaceX Starlink satellite broadband service began operating in Ukraine shortly after Russia began its invasion of the country late last month, and already, more than 5,000 Starlink terminals have been activated in the country, according to an unnamed source speaking with The Washington Post (via Tesla North.) 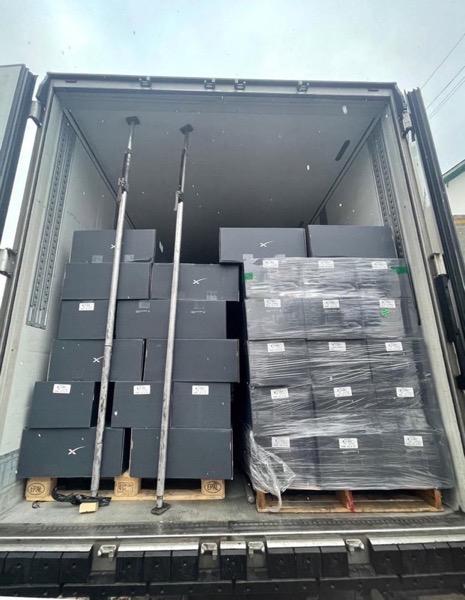 SpaceX CEO Elon Musk revealed in February that Starlink had surpassed 250,000 user terminals across the globe.

In a comment to The Washington Post regarding SpaceX’s efforts in Ukraine, musk told the publication to give his regards “to your puppet master Besos😘😘,” referring to Amazon founder Jeff Bezos, who owns The Post.

SpaceX is sending regular shipments of Starlink user terminals to the country to help maintain communications and infrastructure, with the latest batch arriving on Friday.

Recently shared Starlink speed tests from Ukraine detailed download speeds of over 200 Mbps. That’s enough for the government and citizens to stay online, coordinate emergency efforts, and maintain communications with the world.

Following the Russian invasion, Mykhailo Fedorov, Ukraine’s Minister of Digital Transformation, promptly reached out to Musk on Twitter requesting Starlink access amid fears of Russian forces taking down Ukraine’s access to the internet.

Starlink has since proven instrumental in maintaining connectivity in Ukraine and making sure that administrative infrastructure and humanitarian efforts in the country remain online.

Christmas is just around the corner, and with all the sweet Black Friday deals out there at the moment, there's no better time to get your holiday shopping done. Here are our top picks for tech gifts this holiday season: Apple Gift Ideas Apple's latest flagship smartphone series, the iPhone 14 Pro, absolutely has to...
iPhoneinCanada.ca
7 hours ago

Here are the latest Canadian cellphone plan and device deals, plus other promos from wireless carriers such as Rogers, Telus and Bell, from our partner PlanHub. As always, the promos may change at the last minute, but here they are as of Wednesday, November 23, 2022, which include numerous Black Friday and Cyber Monday deals. Check them […]
IIC Deals
7 hours ago

Cirrus Logic, one of Apple's suppliers, may have just confirmed solid-state Power and Volume buttons with haptic feedback for next-year iPhone 15 Pro models — reports MacRumors. The Texas-based semiconductor manufacturer told shareholders earlier this month that it continues to "engage with a strategic customer" and hopes to bring "a new HPMS component to market...
Nehal Malik
7 hours ago