Following a recent report by Taiwan’s Economic Daily as well as some analyst predictions that Apple’s flagship iPhone X demand could come in below expectations in the first quarter, Apple and a number of its Asian suppliers saw a sharp drop in their stock prices this morning, Reuters is reporting. On track for its worst day since Aug. 10, AAPL dropped nearly 3% today with its market capitalization falling $23 billion. 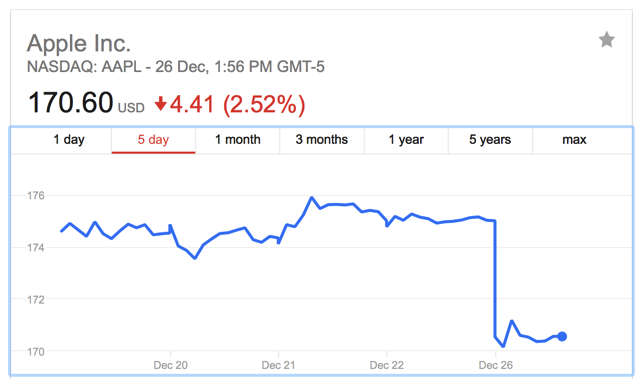 Citing unidentified sources, the Taiwanese newspaper claimed that Apple will slash its sales forecast for the iPhone X in the quarter to 30 million units, down from its initial plan of 50 million units. Meanwhile, analysts are also adjusting their forecasts on iPhone X shipments at the start of 2018 based on demand largely being fulfilled during the holiday quarter.

Some analysts have also flagged disappointing demand. U.S.-based JL Warren Capital is predicting shipments of just 25 million units as consumers balk at the “high price point and a lack of interesting innovations”.

Apple suppliers that were most hit included Genius Electronic Optical Co Ltd which dropped 2.4 percent on Tuesday to take its losses this week to 11.4 percent. Pegatron also fell on both days, losing 3.2 percent this week. But falls for Foxconn, one of Apple’s main suppliers formally known as Hon Hai Precision Industry, were milder and it has lost only 1.8 percent over the two days.

On the other hand, analysts at Jefferies and the Chicago-based Loop Capital remain bullish, forecasting 40 million and 45 million iPhone X shipments for the first quarter respectively.