A new Apple patent published by the US Patent and Trademark Office (USPTO) titled “Inductively chargeable earbud case” proposes an improved method of wireless charging through a multi-coil wireless charging mat that provides efficient charging regardless of how the receiving device is oriented (via Apple Insider). 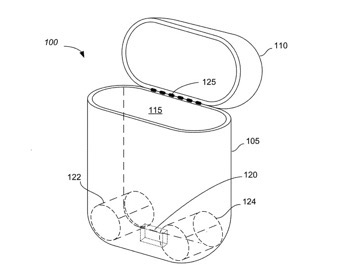 Current generation wireless charging mats requires precise alignment between the charging coils and the receiving device for the power to be transferred. To overcome this issue, Apple proposes its own wireless charging process using images of a possible future AirPods Wireless Charging Case, as well as an AirPower charging pad equipped with multiple overlapping small coils.

The proposed method uses a pair of small charging coils in the AirPods case, occupying the bottom left and right-hand corners of the rear section. Similarly, an AirPower-like charging pad is depicted with a total of 16 charging coils spread in three rows:

“With the suggested dual coil charging system in the case, Apple suggests it would not matter if the case is placed lined up properly or at an angle across the entire surface of the pad, as it would mean at least one of the two receiving coils would be in a sufficient-enough position for a charge.

In positions where both coils are capable of taking an adequate amount of power for recharging, again a switching system would disable the weaker of the two coils.”

As with every Apple patent, it is, however, not guaranteed that the technology would actually make an appearance in a future product or service.