Apple has released its 2015 Inclusion & Diversity Report, releasing details on how the company hires inclusively to create a diverse workforce:

Great ideas push the world forward. And they can come from anywhere. At Apple, we rely on our employees’ diverse backgrounds and perspectives to spark innovation. So we’re hiring more inclusively, choosing partners who make diversity a priority, and creating opportunities for the next generation.

In a letter from Apple CEO Tim Cook, he says the company hired 11,000 women in the past year globally, a 65 percent increase compared to a year ago. Meanwhile, in the U.S., 2,200 Black employees were hired, a 50 percent jump compared to the period a year ago.

Below is a screenshot of Apple’s overall diversity in 2015: 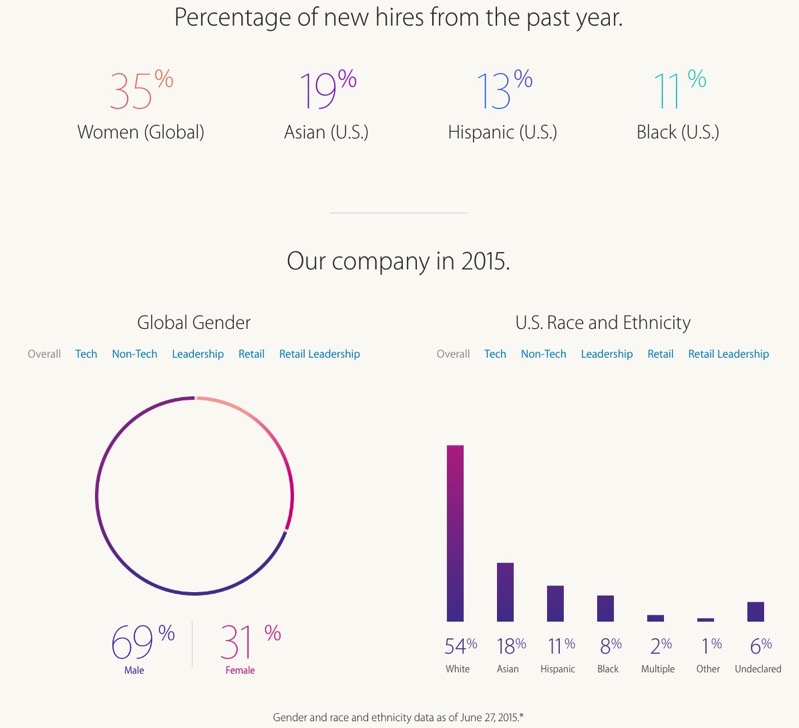 Silicon Valley’s tech sector has long been criticized of being predominantly white and male, but that appears to be very slowly changing with the likes of Apple, along with Google and Facebook hiring more broadly.

Cook says the company is proud of the progress made, but says “there is a lot more work to be done,” emphasizing “Some people will read this page and see our progress. Others will recognize how much farther we have to go. We see both.”