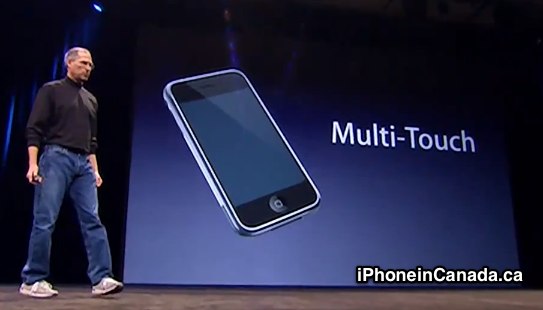 When Apple debuted the iPhone in 2007, the demo of Multi-Touch was something we had never seen before. This is how Apple explains Multi-Touch and how it works:

Multi-Touch control.
With its large Multi-Touch display and innovative software, iPhone lets you controleverything using only your fingers. Type using the predictive keyboard, glide through albums with Cover Flow, scroll through photos with a flick, or zoom in and out on a section of a webpage – all courtesy of Multi-Touch.

How it works.
The Multi-Touch display layers a protective shield over a capacitive panel that senses yourtouch using electrical fields. It then transmits that information to the LCD screen below it. Andthe iPhone software enables the flick, tap and pinch.

According to MacRumors, it appears Apple has been denied their original trademark application for Multi-Touch by the Trademark Trial and Appeal Board at the United States Patent and Trademark Office (USPTO). Here is the conclusion of the decision, as seen in the ruling:

“Thus, in view of the foregoing, and given the highly descriptive nature of the designation MULTI-TOUCH, we would need substantially more evidence (especially in the form of direct evidence from customers) than what applicant has submitted in order to find that the designation has become distinctive of applicant’s services.

Again, simply because the applied-for term has been used in association with a highly successful product does not mean the term has acquired distinctiveness.”

Decision:
The examining attorney’s finding that the Section 2(f) showing is insufficient is affirmed.

It appears their trademark application has failed due to its generic appeal. Steve Jobs revealed at D8 in June of last year Multi-Touch originated from a tablet idea, only to be fast-tracked to creating the iPhone, first.

Back in 2007, when Steve Jobs proudly announced the iPhone, Multi-Touch was described to have have the following characteristics:

He was also sure to mention, “…and boy have we patented it”. Too bad the trademark fell through, eh? Check out the video below (it’s a classic):