Last week, Apple rolled out iOS 13.5 beta 3 to the developers which included its new COVID-19 contract-tracing tools developed in collaboration with Google, and today, the two companies have jointly introduced user interface and sample reference code for public health authorities developing apps that use the tool (via VentureBeat). 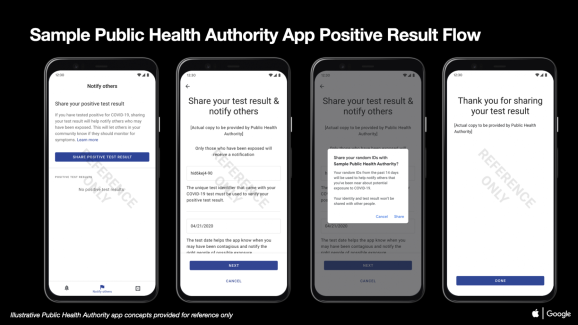 Dubbed the Exposure Notification API, the new COVID-19 tracing tool relies exclusively on Bluetooth Low Energy. However, some contact tracing apps in some parts of the world are also collecting GPS data, which is why the two companies have also released guidelines public health authorities must follow to distribute these apps on Apple Store or Google Play.

According to an Apple spokesperson, apps being made to use the Exposure Notification API will not be allowed to use Location Services.

Apple and Google spokespeople said the limit of one API use per country is to reduce fragmentation and increase adoption, but the companies said they will be flexible to work with countries where state or regional approaches are taken.

Apple and Google’s guidelines also emphasize that apps being created by or for government public health authorities must seek user consent before sharing test results and perform data collection only for COVID-19 response efforts.